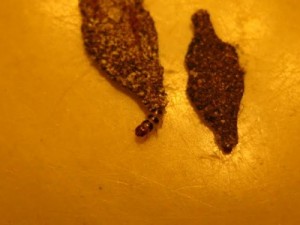 Worm with a sand-like shell

A reader recently inquired about a worm he has come across frequently while living in Hawaii for the last 3 years. He describes them as being small and flat, with a sand-like shell that they pop their heads out of.

We believe these creatures are Phereoeca uterella, which are classified as moths, not worms. Known commonly as the “household casebearer”, these moths create their ‘cases’ during the earliest larval stage. The case is constructed with secreted silk that binds small particles of sand, soil, animal droppings, and other various fibers for camouflage. It is shaped like a pumpkin seed with small openings at each end. The inside of the case is entirely lined with silk, and it is where the larva resides. Once the larva begins to mature, the case will grow along with it, or may be dragged along as the larva moves. Eventually, a moth will emerge from the case and leave it behind.

Based on the photos the reader submitted, we believe that he discovered the household casebearers at a later stage of larva development.

These little creatures mainly eat spiders and spider webs, but might also eat wool carpets or clothing. The reader wasn’t concerned with getting rid of these bugs, but cleaning your home often to remove spider webs and cobwebs is a good way to keep them at bay.

In summary, a reader asked us to figure out the type of bug that has been found in his Hawaii homes over the last couple years. After doing some photo comparison we were able to confirm that these creatures are Phereocea uteralla, also known as household casebearers. 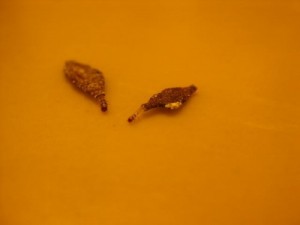 Article Name
Worm with a sand-like shell
Description
A reader inquired about a worm he came across while living in Hawaii. He says they are small with a sand-like shell that they pop their heads out of.
Author
Dori Franklin
Comments: 1 Posted by: Worm Researcher Dori Categories: Interesting Worms, Silk Worms