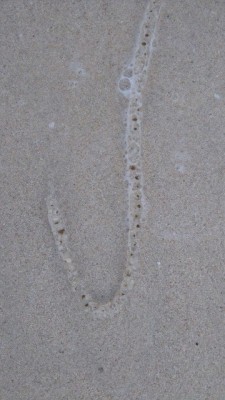 Today, we’re addressing a question from a reader in Dubai. She writes because she has found some creatures on the beach, and she’s wondering if they are worms. She adds that it is the first time she has seem such critters there, and she has included a picture. 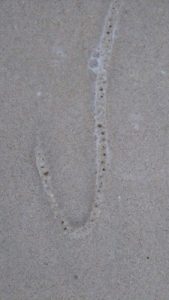 Unfortunately, it’s hard to really see what is going on in this picture. Enlarging the image doesn’t offer much in the way of additional information. To us, this appears to be a series of holes in the sand following a curving track.

So as to whether these animals are worms or not, we cannot conclusively answer that question one way or another. However, given that this picture was taken on a beach, we do have a very good guess:  Lugworms.

Lugworms (also called sand worms or Arenicola marina) are often dug up to be used as fishing bait. The lugworms leave little holes in the sand as they borrow and are often found on beaches. 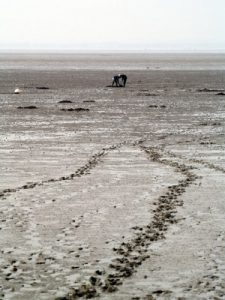 They are also known to leave swirling patterns in the sand, such as those our reader found. Here is a video showing a beach that has a large population of Lugworms, showing their burrows and castings.

It is also possible that our reader has not found worms at all, but that she is actually looking at signs of some other sand-dwelling critter. For example, the sandhopper (family Talitridae) is a small amphipod. According to Wikipedia:

Amphipoda is an order of malacostracan crustaceans with no carapace and generally with laterally compressed bodies. Amphipods range in size from 1 to 340 millimetres (0.039 to 13 in) and are mostly detritivores or scavengers. There are more than 9,900 amphipod species so far described. They are mostly marine animals, but are found in almost all aquatic environments. Some 1,900 species live in fresh water, and the order also includes terrestrial animals and sandhoppers such as Talitrus saltator.

While this description is helpful, it doesn’t mention how adorable these little creatures are, so we’re providing a photograph: 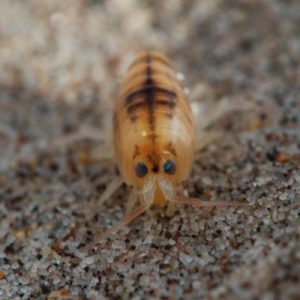 More importantly, they leave trails in sand that are similar to those that our reader found. 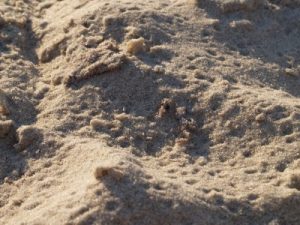 In conclusion, we really cannot positively identify what our reader has found in the sand, but we’ve given a couple suggestions. Perhaps our reader can get a closer look and write back with suggestions. If so, it would be great if she could either reply in the comments or reference this article so we know what article she’s providing follow up for.

Article Name
Creatures on Dubai Beach Offer Little Identifying Information
Description
Today, we’re addressing a question from a reader in Dubai. She writes because she has found some creatures on the beach, and she’s wondering if they are worms. She adds that it is the first time she has seem such critters there, and she has included a picture.
Author
Alexis Rodriguez-Carlson
Comments: 0 Posted by: Previous Author Categories: Fishing Worms, Interesting Bugs, Interesting Worms, Worms Generally