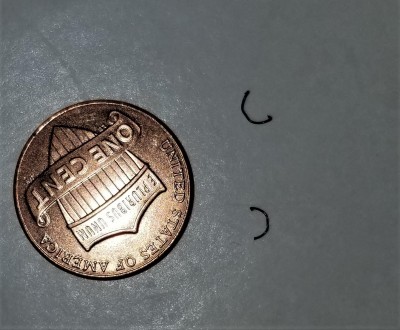 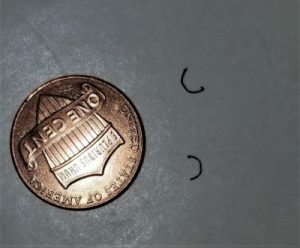 From the excellent photograph our reader sent in, we get a clear size comparison between the worms and a penny coin, which emphasizes the minuscule size of the black worms. Given their size, it becomes difficult to identify these worms. The smaller they are, the more likely it is that they are at the beginning stages of maturation, meaning they may be newly hatched. When newly hatched, larvae and worms are basically featureless, just like these worms, and without any unique characteristics that might set them apart from other larvae/worms, they become virtually impossible to identify.

Besides being black in color, these worms appear to have a pointy, arrow-shaped end, though it is unclear whether that end is the head, or its ‘tail’. When considering black worms of similar size, the creature that most closely resembles the worms in this photo are leeches. Leeches are considered a part of the phylum annelida, which are a category of segmented worms which includes: earthworms, sewage worms, and bristle worms. They typically live in bodies of freshwater, but as there are over 700 species of leeches, there are exceptions to this. In the US alone, there are presumably around 63 species, according to NatureNorth. Regardless, they are not known to infest homes, and would thus only be found in one because something brought them in, such as a pet or person.

Although leeches are typically somewhat ‘flat’ when fully matured, they can appear in a more tubular, ‘worm-like’ shape when younger. Throughout all stages of their lives, leeches feed on the blood from other animals. For this reason, it is possible like our reader said that her dog, or the landlord’s cats brought them in. According to the source linked above, despite people’s generalized fear of leeches, they are not all that dangerous. When a leech feeds on an animal, the amount of blood withdrawn is not harmful to the prey in the long run, and the chances of disease transmission are slim. Of course, if our reader is concerned about her, or her dog’s health, we urge her to consult a medical professional. As we are not medical professionals, this is not an area in which we can provide aid.

However, we do want to stress that given the size and lack of features of the worms found by our reader, we are not 100% certain that these worms are leeches. We advise that our reader puts these worms in some kind of container with some air holes and food in it to see what the worms grow up into.

In conclusion, we are not entirely sure what these black worms are that our reader found in her sheets, though it is possible that they are young leeches. In any case, we wish the best of luck to our reader, and hope that this issue may be resolved soon.

Article Name
Woman Potentially Finds Young Leeches in Bed Sheets
Description
Glossy, black worms were found by this reader in her bed sheets. Having recently moved to Florida, our reader wonders if this is something her dog or her landlord's cats is bringing in to her home, and hopes that we can tell her what these creatures might be.
Author
Worm Researcher Anton
Comments: 0 Posted by: Worm Researcher Anton Categories: Leeches, Parasite Worms, Segmented Worms Annelida