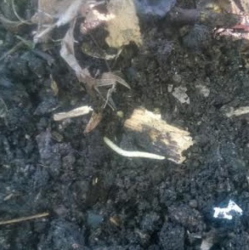 A reader just contacted us about a worm she found in her yard. She provided some great details, as well as a photograph. According to our reader, the worm is about an inch long, appears to be segmented, and is white. She wrote that she found this critter under her bird feeder, in an area where her cat often uses the bathroom.

She hopes we can comment on what kind of worm this is. Specifically, she wonders if it is a typical worm that could be found in dirt, or if it is possibly a parasite.

The photo she sent was taken at a significant distance from the specimen, so we will have to rely on her description. What kind of worm is one inch long, segmented, and white?

We have a couple suggestions as to what this worm may be.

Our first idea is that this is a wireworm, which is a click beetle larva. Wireworms eat vegetables, so if our reader has a vegetable garden this could be a viable answer. However, wireworms are usually more yellow in color, and our reader clearly said this worm is white. This could also be another type of insect larva other than a click beetle. That is probably the most likely scenario.

Our other idea is a bit less pleasant. Based on the description and photo, this could be a parasitic worm that was excreted from the cat. We don’t think this is necessarily likely, but we will delve into some specifics anyways. We think that there is a small chance that this creature is a string of tapeworm segments. Most tapeworms are quite long, some grow over a foot in length, but sometimes smaller portions get excreted. However, tapeworms have very short lives once they leave the host’s body. This means that our reader would have had to noticed the worm and taken this photo directly after her cat emptied its bowels in that area.

Although we have mentioned the possibility that this is a parasite, we are pretty confident that it is just an insect larva. We are not vet specialists though, and we encourage our reader to take her cat into a professional to confirm, especially if her cat is showing symptoms of being ill.

To wrap up, a reader asked us whether a white worm she found in her garden was a parasite or if it was normal. We believe it is some sort of insect larva, but we can’t rule out it being a parasite because we are not veterinary professionals.

Article Name
White Worm Found in Dirt
Description
A reader asked us whether a white worm she found in her garden was a parasite or if it was normal. We believe it is some sort of insect larva, but we can't rule out it being a parasite because we are not veterinary professionals.
Author
Dori Franklin
Comments: 0 Posted by: Worm Researcher Dori Categories: Cat Worms, Garden Worms