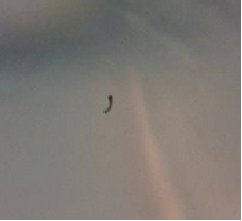 We recently received a very short email that asked us if we could identify a short, thin white worm. More precisely, the worm is about one quarter (1/4) to one half (1/2) of an inch long, or about a half to full centimeter, and it is as thin as pencil led. This is all the information we received, and in fact we weren’t even sent a specific question – the description of the worm’s body was only followed by a question mark (or actually three in this case). We presume the reader wanted to know what he found (assuming he even found something), so we’ll focus on identification: what kind of white worms are as thin as pencil lead?

Unfortunately, no picture was submitted along with our reader’s question, so we aren’t working with an image to help with our identification efforts. In this case, though, it is not clear how helpful an image would even be, as there are an enormous number of small, white worm-like creatures, and it is often difficult to look at an image and discern precisely what it is. A picture is always helpful, though, and in this case it would also be good to get a little more information about where the worm was found. Was it found inside? If so, where exactly in the house? The bathroom? The kitchen? This is vitally important information when trying to identify something as generic as a “small white worm.”

And speaking of small white worms, one thing our reader almost certainly didn’t find is a worm. Rather, it sounds like he found some sort of larvae. What type of larvae is impossible to say with the information supplied to us, but based on the description it might be a maggot, which are the larval form of flies. “Maggot” generally refers to the larval form of Brachyceran flies, such as houseflies, with the classic maggot being the small white creatures that you might see in, say, a dumpster, and this would seem to roughly match the description of whatever our reader is hoping to identify. However, maggots can be a little plump, and in any case they generally aren’t as thin as pencil lead. It is also possible he is finding the larval form of Nematocera flies, which covers a number of creatures that people generally don’t think of as flies, like mosquitoes, midges, and, most relevantly in this instance, gnats. In fact, perhaps the most promising suggestion we can come up with is that our reader is referring to gnat larvae, which look like maggots, but are particularly small.

Fly larvae is the most promising identification we can offer given the limited information we are working with, but we are definitely not confident that we have correctly labeled whatever our reader is trying to label. He could have just as easily have found a number of other types of larva, like the immature form of a number of moth and beetle species, many of which are small and white. So, we can’t give our reader a precise identification, but we can at least confidently state that he is trying to identify a larva and not a worm.

Article Name
Short White Worm as Thin as Pencil Lead
Description
We recently received a very short email that asked us if we could identify a short, thin white worm.
Author
All About Worms
Comments: 0 Posted by: Worm Researcher Evan Categories: Interesting Worms