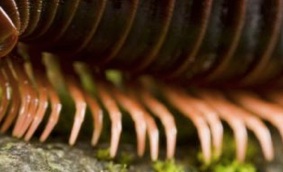 Strictly speaking, worms don’t have legs, so the title of this article is essentially about a fictional topic. However, many people ask us to identify “worms” with legs, and moreover worms have something kind of like legs – namely, setae (essentially, hair) – so we figured we should address the matter of worm legs, despite their non-existence (kind of like how we addressed worm eyes, which also don’t exist in any meaningful sense of the term “eyes”). Do many people think worms have legs? Yes. Is there any reason to mistakenly think that worms have legs? Yes. But do worms have legs? No. To sort out how these questions can have these answers, we address each in turn below.

The reason why many people think worms have legs is simply because many people aren’t exactly sure what worms are. This is eminently understandable, considering that the word “worm” refers to an obsolete taxon. In other words, “worm” is more or less scientifically meaningless because it is so imprecise. Of course, though, the word “worm” is not itself entirely meaningless; people understand that it refers to certain creatures in the world – the issue is that some refer to any cylindrically-shaped creature as a worm, and this is where the “worms with legs” confusion begins.

People refer to a wide range of creatures as “worms,” including caterpillars, various other types of larvae, and even millipedes, and if these creatures are worms, then worms do indeed have legs. But as we explained in our article about the definition of “worm,” we see no reason to refer to things like caterpillars and millipedes as worms. For one, these creatures already have common names. For two, a worm, despite the looseness of the term, is generally defined more narrowly, paradigmatically referring to earthworms, as well as to other annelids, platyhelminthes, and nematodes, but not to just any small, elongated creature. So, worms do not have legs, unless one wants to abandon “worm” to even greater semantic promiscuity than it is already subject to.

But before we conclude, we should mention that many worms (defined in the way we favor) have setae. While it would be a little bizarre to conceive of setae as legs – as stated above, they are more like hair – they do help worms move. More precisely, they prevent creatures like earthworms from backsliding as they wriggle forward. (They also make it harder for predators to pull them out of the ground.) Clearly, setae aren’t really legs, but it’s not totally unreasonable for someone unfamiliar with the anatomy of worms to think of them this way.

To sum everything up: unless you want to define the word “worm” incredibly broadly, worms do not have legs. However, they do have setae, which are a bit like legs, but only because they help worms move.