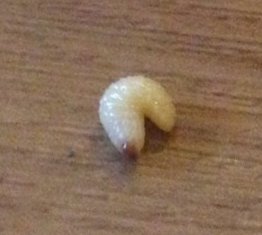 A few days ago, a reader sent us a picture of a fat white larva with a brown head. The larvae is quite plump, and its head looks like a small brown ball that is pressed into the end of the larva’s fat body. The reader sent in a couple of nice pictures of the larva in question, and asked us to identify what it might be. What is the fat white larva our reader is finding?

We’ll begin as always by looking at the picture our reader sent in:

An additional picture was submitted, but it essentially shows the same thing, so we didn’t post it.

Although this is a clear image that shows the larva in question quite well, the reader sent along no additional information to help with identification. The detail we would most like to know is where the larva was found. In the picture, the larva is clearly on some sort of wooden floor that is presumably inside, but we aren’t sure if this is where the larva was originally found. This is especially relevant in this case because the reader appears to have found a grub, and where the creature was found would help us identify what kind of grub it is. Regardless, though, we think she found a grub and will proceed accordingly.

The word “grub” is quite vague and is used to denote a wide range of different larvae. It is most commonly used to refer to the larval form of beetles, especially the larval form of scarab beetles (of the superfamily Scarabaeoidea) because several of these species are so-called “lawn grubs,” but some people essentially use “grub” as a synonym for “larva.” Although we can’t name the precise species of grub our reader found, it looks like a root weevil larva. Root weevils, and by extension their larval form, are occasionally found in homes, and this appears to be where the reader found the creature in the above picture (or else she carried them inside to be photographed on her floor, which seems unlikely). Root weevils don’t cause any harm to people or furnishings, and they will leave on their own in almost all cases. They seem to come inside only to escape dry, hot weather, although other factors (like a source of moisture) could draw them to a house as well.

We aren’t certain our reader found a root larva weevil, but it looks a lot like one, and it also wouldn’t be unusual to find one in the house. The reader expressed no alarm about what she found, and this is just as well because she almost certainly doesn’t have anything to worry about. She can sweep out the beetles or larvae when she comes across them, but they will most likely soon leave on their own.

Article Name
Fat White Larva with Brown Head
Description
The larvae is quite plump, and its head looks like a small brown ball that is pressed into the end of the larva's fat body.
Author
All About Worms
Comments: 14 Posted by: Worm Researcher Evan Categories: Interesting Bugs