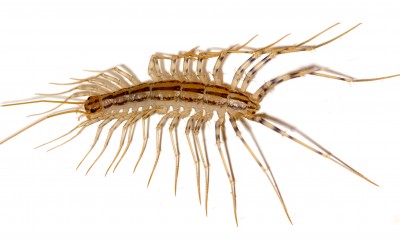 To Get Rid of Centipedes, Take Away Their Food!

Today, we will discuss a question from a reader who would like to know how to eradicate centipedes in her home. The good news is that centipedes do not tend to swarm or invade in large groups. This means it is not usually difficult to control local centipede populations.

First, we want to make sure that we are all talking about the same animal. Centipedes are often confused with millipedes, but they’re very different beasts. Centipedes (class Chilopoda) can be identified by their speed (they move very fast) and their many legs. There are over 3,000 described species of centipede in the world. While the word “centipede” means “100 legs,” centipedes may have as few as 30 legs. As one might expect, centipedes come in many assorted sizes and colors. 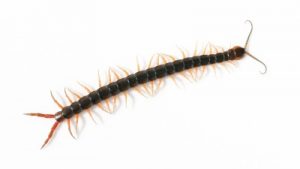 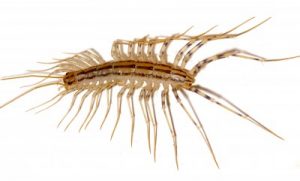 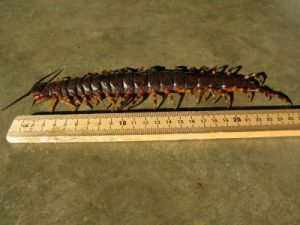 The largest centipede species can grow to be 12” (~30.5cm) long! This is the Scolopendra gigantea, which lives in South America and the Caribbean. Photo by Tod Baker (CC BY-SA 2.0, via Wikimedia Commons)

Centipedes are predators. They eat insects, earthworms, spiders, and slugs. Like most predators, centipedes kill their prey before eating. Centipedes inject venom (using a pair of modified legs at the front of their bodies) to kill their prey.

Because of this, centipede bites can be painful to humans. These bites don’t tend to cause serious medical issues. Still, we recommend consulting a doctor if an insect bite is causing irritation. There are several species of centipedes whose bites can cause serious problems.

People tend to be unhappy to have centipede housemates, but most are harmless to humans. They’re doing us the favor of eating other household pests that we prefer not to have around. If our reader wants to encourage her centipede housemates to go elsewhere, we recommend she remove their food source. This means sweeping, mopping, dusting, and vacuuming regularly. Extra attention should be paid to corners and under furniture, where debris tend to settle. By cleaning, she will remove the bits of skin and other debris that attract the smaller animals that the centipedes eat. When she meets a centipede, we recommend that she catch it in a jar (if she can, they’re fast!) and release it outside.

If our reader finds many centipedes in her house, we recommend she contact a local pest-control company. An expert specializing in prevention can help convince her unwanted housemates to leave.

Article Name
To Get Rid of Centipedes, Take Away Their Food!
Description
Today, we will discuss a question from a reader who would like to know how to eradicate centipedes in her home. The good news is that centipedes do not tend to swarm or invade in large groups. This means it is not usually difficult to control local centipede populations.
Author
Alexis Rodriguez-Carlson
Comments: 0 Posted by: Previous Author Categories: Interesting Bugs