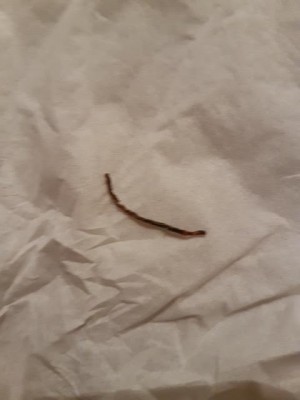 A reader recently reached out to us because she has been discovering dead worms on her bedroom carpet and bathroom floor over the last few days. She says it seems as if they have appeared out of nowhere. She wrote that she has found about 6 worms total (they were all dead.) She is anxious to know what these worms are and where they are appearing from because they give her the creeps. Here is the first photograph she sent us: 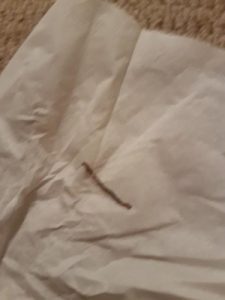 The picture is a little blurry, but we can see that it is skinny and brown. While we don’t know what kind of worm this is, we can rule out most of the different kinds of larvae we write about: carpet beetle larvae (which are tear shaped and orange or brown), pantry moth larvae (which are tiny and pink), drain fly larvae (which are tiny larvae with translucent and black bodies), and caterpillars. We think this is definitely a worm, and not a type of larvae. Let’s have another look: 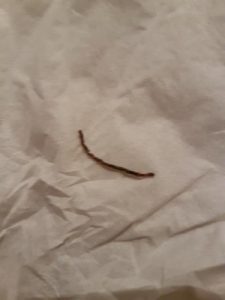 We think this might be a dead earthworm since it is about the right size and shape that an earthworm would be. It is a darker brown that most earthworms, but this color difference can probably be explained by the fact that it is dead. Unfortunately we can’t confirm that these are dead earthworms.

We once heard from a reader who found similar dead worms in her home. In that situation, we thought the worms were black worms. The worms our reader has found could be black worms as well. Black worms become extremley dehydrated before dying, so it is possible that these worms are not actually dead, just slowly dying of dehydration. We recommend  our reader sweep up these worms and put them outside near moisture in case they are still alive but severely dehydrated. She can also focus on sealing up potential entry points.

In conclusion, one of our readers discovered some dead worms in her home. We think these worms might be dead earthworms or just severely dehydrated black worms.