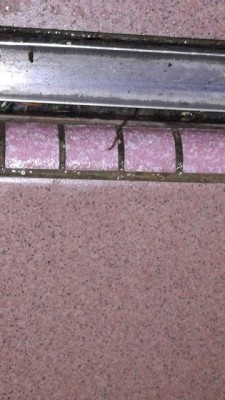 Worm in Kitchen is Earthworm, Not Centipede

Today a reader asked us to weigh in on the identification of a worm he found in his kitchen: 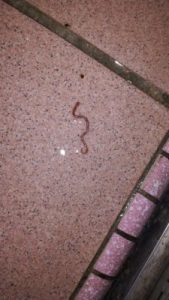 He said he has discovered centipedes in his kitchen before, but this definitely isn’t a centipede. It is long and reddish brown, and lacks the prominent legs that centipedes possess. What could this organism be?

This is an earthworm! Earthworms are segmented worms that belong to the phylum Annelida. There are over 2,500 species of earthworms around the world. They vary in color from gray to red to brown, and can even grow to be several feet long depending on the species. Earthworms live in environments that provide oxygen, food, moisture, and an ideal temperature. You can easily find them in soil, where they feed on both living and dead organic matter. The earthworms’ ability to break down organic matter and excrete nutrients make them crucial to ecosystem restoration. So, if an earthworm thrives in the soil, what is it doing in our reader’s kitchen?

We think the earthworm probably ended up inside his home by mistake. It might have be accidentally transported in while attached to a shoe or pet. It also could have crawled in through an open door or window, or an unsealed crack in the foundation of the house. Since earthworms aren’t harmful or dangerous, we recommend that our reader simply place the worm back outside where it can return to the soil. If he continues to find these worms, or any other creatures, inside his home he might want to investigate how they are getting inside. If his home is especially humid, he can install a dehumidifier to reduce the moisture and make it less appealing to critters.

To wrap up, one of our readers found a long, red worm in his kitchen. We have identified the specimen as an earthworm. 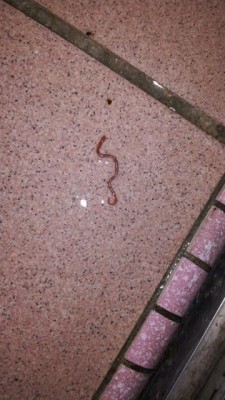 Article Name
Worm in Kitchen is Earthworm, Not Centipede
Description
One of our readers found a long, red worm in his kitchen. We have identified the specimen as an earthworm.
Author
Dori Franklin
Comments: 1 Posted by: Worm Researcher Dori Categories: Earthworms