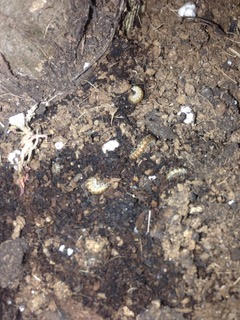 What are Palm Tree Pests?

January 22, 2018
One of our readers reached out to us due to some worm-like organisms he discovered in his plant. He explained that he bought a palm plant about a month ago from a Canadian greenhouse. He noticed some worm-like organisms near the surface of the plant, but when he watered  the plant (soaked until water comes out of the drainage holes) the worms crawl out of the drainage holes where they die in the plant tray. He doesn’t know if these specimens are harming his plant or just coexisting. Here is a picture of the plant: 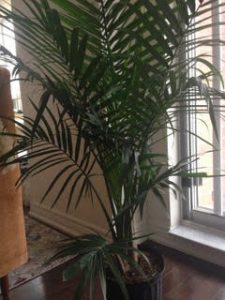 So, what are the creatures our reader has found? Our first thought is that they are palm flower moth larvae. These larvae feed on the blossoms of palm fans and live in palm trees. Once the larvae are ready to mature, they crawl into the bark of the palm tree to pupate. Palm flower moth larvae are reddish-pink colored and are found in Arizona, Nevada, and parts of California. This is the photo our reader sent us of the creatures in question: 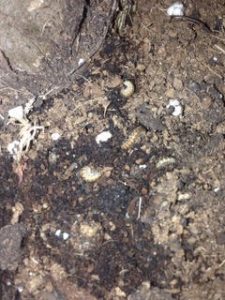 We think these might be millipedes, or a type of caterpillar. However, we can’t see enough detail of the organisms in the photograph to make a definite identification. We think they might be millipedes since they have brown segmented bodies, and some of them are shaped in a curled C-shape (millipedes curl into a C-shape when they are under distress.) If the organisms don’t have a plethora of legs, then they are definitely not millipedes.  Unfortunately, since we don’t know what these creatures are, we can’t determine if they are harming our reader’s plant or not.

In summary, one of our readers discovered some worm-like organisms in his palm plant. We think these creatures might be millipedes or caterpillars.

Article Name
What are Palm Tree Pests?
Description
One of our readers discovered some worm-like organisms in his palm plant. We think these creatures might be millipedes or caterpillars.
Author
Dori Franklin
Comments: 0 Posted by: Worm Researcher Dori Categories: Caterpillars, Centipedes and Millipedes