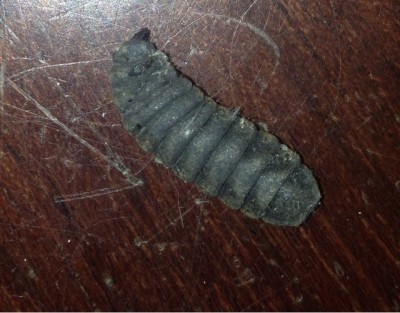 Man May Have Mold-Eating Larvae in His Room

Today we will try to help a reader who is having some issues with black soldier fly larvae (Hermetia illucens) in his room. At least, he thinks that is their species. He has included a photograph.

He does not understand why he is finding these in his room and where they are coming from. He does not have a compost pile, his house is cleaned often, and his trash is emptied regularly. He does not have any plants. Since he started finding them, he has been cleaning even more often than usual. Still, he continues to find a couple of the larvae in his room every day or two. It has gotten to the point where he will not even open his window so that they cannot enter from outside. He is wondering if a mold issue he had in his walls recently might be providing them with food.

We agree that this looks like a Hermetia illucens larva. It is possible that they are present not because of the mold but because some sort of plant started growing in the moisture that caused the mold. If the plant has now died, then soldier fly larvae will happily chow down the decomposing plant-bits.

If the eggs were laid while there was a lot of moisture in his walls but the problem has since been taken care of, then it is possible that these larvae hatched and are now looking for food. Because the problem was taken care of, they may be having a hard time finding food. In that case, they are coming out of the walls to find food. If that is the case, then we would expect the larvae to stop appearing soon.

If they continue appearing over the next couple weeks, we recommend that he have the mitigation team that took care of his mold problem come back out to ensure that there is no mold (or other icky stuff) remaining. Mold is the type of issue that gets harder to deal with the longer it stays, so he will want to take care of it as quickly as he can. We wish him luck.

Article Name
Man May Have Mold-Eating Larvae in His Room
Description
Today we will try to help a reader who is having some issues with black soldier fly larvae (Hermetia illucens) in his room. At least, he thinks that is their species. He has included a photograph.
Author
Alexis Rodriguez-Carlson
Comments: 0 Posted by: Previous Author Categories: Interesting Worms, Worms Found in the House