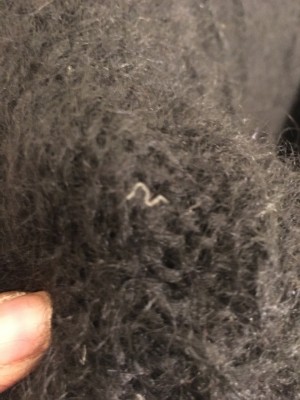 What seems like two different worms have been turning up consistently for over a month in the bedroom of this reader in Minneapolis, Minnesota, and she wonders if we can help identify them for her. From the pictures provided and the descriptions given by our reader, we know that one worm is an off-white color and around 1/5-inches in length, and the other is completely translucent in color and 3/4-inches. 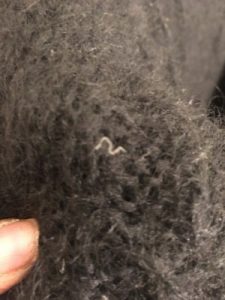 The pictures sent in with this query are of the worms on a “think hoodie sweatshirt” which is 80% cotton and 20% polyester. In elaborating on her findings, our reader states that the first worm seemed to possess no other color than the aforementioned off-white. With respect to the second worm, she found three of them this time on her sweater and cannot tell if they have hairs all over their body or not. Our reader states that “they don’t look like the average carpet beetle or clothes moth larvae”, though it is unclear if she is referring only to the translucent larvae, or both species of worm-like creatures. Later, she adds that she found a “friend” of the larvae on the waistband of a pair of leggings, who was less than 1/2-inch in length and had black stripes. She contacted her local extension office for identification, and while they suggested that our reader was dealing with an infestation, which we definitely agree with, they could not identify any of the creatures. Instead, they told her to contact her county public health office for a home visit. However, before our reader calls the public health office for an appointment, she would appreciate knowing “at least” some of the creature she may be dealing with.

First off, we would suggest that the off-white worm is a clothes moth larva of some sort. Its off-white color, size and location of discovery point to this conclusion. Whether it is a webbing clothes moth larva or a case-making clothes moth larva, both species will be found on any animal-based textiles which they can chew through to store up energy for their eventual metamorphosis. In terms of the black-striped organism on her leggings, this would likely be a carpet beetle larva, which behave in pretty much the same way that clothes moth larvae do. In regards to the translucent worm, we are unsure as to the species of it. Given that it is “100% translucent”, according to our reader, and the location it was found in, we would lean toward saying that this is a flea larva. Flea larva can sometimes be found in and under beds or in the folds of clothing and the like, despite them not feeding on fabrics like clothes moth larvae do. They will especially be found in places like this if there are any pets around which occupy these spaces. If our reader has a dog or cat that often sleeps in her bedroom, she might want to get them checked for fleas.

On the other hand, the shape of this translucent worm does not correspond with the body of a flea larva, neither does its 3/4-inch length (see first picture and picture below). Provided this information, we would rather say it is a pot worm. Pot worms live in soil and are composting worms, meaning they live and behave much like the earthworm or red wiggler does, eating decomposing organic matter to produce nutrient-rich waste materials. How several pot worms ended up on our reader’s sweater, we would not be able to say. It is possible that perhaps they crawled out of a houseplant in our reader’s bedroom because the soil conditions became unfavorable and went in search of a more hospitable environment. However, given that our reader has been finding these worms consistently for the past month, and pot worms only multiply if soil conditions are favorable, we find it unlikely that they are pot worms (though it should not be ruled out as impossible!). It is also possible that the translucent worm is some other species of moth larva, and in that case, they can both be treated and eliminated similarly. 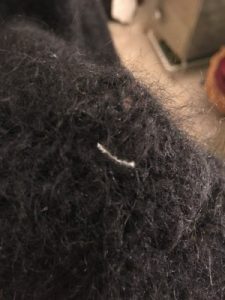 When our reader tried to confer with her landlord (who owns the house she lives in, where she rents out one of the bedrooms), she was not believed. “My landlord thinks that I am delusional and that my problem is lint. I am overwhelmed because the problem is all over the house but since he doesn’t believe me, I can only do so much. Ever since I discovered the damage that these little worms caused, I started cleaning my bedroom like a mad woman. I could only do so much cleaning of the common areas without triggering an argument.” Unfortunately, vigorous cleaning is the most effective way of controlling an infestation as it makes the environment unsuitable for many pests and cleans out the existing creatures that are roaming around.

To conclude, we have identified the off-white worm as a clothes moth larva. If our reader thinks she may be experiencing an infestation of this worm specifically, and she wants specific information as to how to deal with a clothes moth larva, she may visit a past article written on the subject. In terms of the translucent worms, we are not sure as to their identity. We would suggest flea larvae over pot worms, but we cannot say with absolute certainty.

Fortunately, even without knowing what the translucent worms are, getting rid of both species of these creatures requires the same thing, rigorous cleaning of the room and laundering of animal-based materials, which should at least help keep the worms out of her room. We wish the best of luck to our reader in dealing with both of these situations. Otherwise, if any of our other readers have any clues as to the identity of these mysterious translucent worms, they should feel free to comment any ideas below!

Article Name
Two Species of Whitish Worms Found in Bedroom are Clothes Moth Larvae and Possibly Flea Larvae
Description
What seems like two different worms have been turning up consistently for over a month in the bedroom of this reader in Minneapolis, Minnesota, and she wonders if we can help identify them for her. From the pictures provided and the descriptions given by our reader, we know that one worm is an off-white color and around 1/5-inches in length, and the other is completely translucent in color and 3/4-inches.
Author
Worm Researcher Anton
Share the knowledge