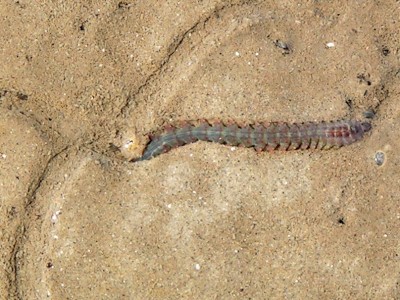 Ragworms May Be Planting Gardens so They Can Enjoy the Harvests

Every gardener has seen worms and larvae living alongside their plants. Unfortunately, most gardeners have also had to deal with the little critters eating those same plants. However, very few of us have seen worms that plant their own gardens.

That is exactly what a research team headed by Zhenchang Zhu discovered when studying the ragworm (Hediste diversicolor). They described their findings in the December, 2016 article entitled Sprouting as a Gardening Strategy to Obtain Superior Supplementary Food: Evidence from a Seed-Caching Marine Worm that was published in the journal Ecology.

Ragworms live in the ocean and have been previously admired for their effective food gathering methods. While remaining safe in their dens, ragworms spread webs made of mucus across the dens’ openings. The web catches bits of plant, and some small animals, as they float by on the ocean current. At mealtime, the ragworms can just reach out and grab their food. However, these little bits of flotsam and jetsam cannot always be depended upon to provide a balanced diet. So, some clever ragworms are a bit more proactive.

Zhu and his cohorts noticed ragworms dragging seeds to their dens. The natural assumption was that the ragworms were eating the seeds. Seeds contain a huge amount of calories, nutrients, and protein. Because of this, they are a very popular food for humans and other animals. It would make sense that ragworms would enjoy eating them, as well. However, no one has ever reported seeing a ragworm eating a seed. Zhu and his fellow researchers decided to find out what was happening.

Three weeks later the researchers sifted through the sand. They found that the worms had eaten all the sprouts, but that the unsprouted seeds were left intact. This led them to believe that the worms were not dragging the seeds to their dens to eat right away, but to plant so that they could eat the sprouts.

This makes a lot of sense, since cord grass seeds have a thick husk surrounding them. This husk makes it difficult for seed predators, like ragworms, to eat the seed directly. The ragworms will, however, happily munch on de-husked seeds.

Of course, it is possible that the worms were simply saving the seeds for later. However, since they did not eat any of the seeds, that seems unlikely. The researchers suggest that the worms may be burying the seeds with the purpose of eating the sprouts once the seeds germinate. Of course, as every gardener knows, not all seeds grow. The seeds that refuse to grow likely decompose in place. The worms may be able to eat the seeds as they decompose, as well.

Zhu and his coauthors are not necessarily suggesting that the ragworms are intentionally planting gardens. They propose that this is may be more of an adaptive feeding strategy than signs of long-term planning. However, either way, this is a new behavior that has not previously been previously observed in such organisms. We are grateful for Zhu and his fellow researchers for helping us to understand more about the lives of some of our favorite creatures!

Article Name
Ragworms May Be Planting Gardens so They Can Enjoy the Harvests
Description
Every gardener has seen worms and larvae living alongside their plants. Unfortunately, most gardeners have also had to deal with the little critters eating those same plants. However, very few of us have seen worms that plant their own gardens.
Author
Alexis Rodriguez-Carlson
Comments: 0 Posted by: Previous Author Categories: Interesting Worms, Marine Worms