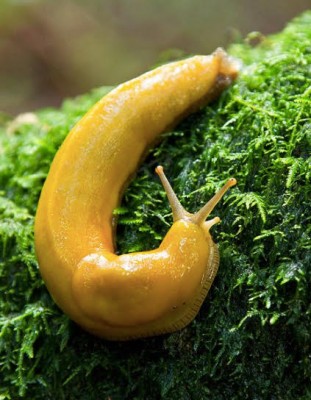 There are a handful of specimens that have earned clever nicknames due to their appearances, movement patterns, and/or behaviors. For example, inchworms (which are actually geometer moth larvae) are named after their unique way of moving, which looks as though they are measuring the earth inch by inch as they crawl along. Bloodworms (a.k.a. midge fly larvae) get their nickname from their striking red blood-like color, which is due to the presence of hemoglobin (a red protein) in their bodies. Our favorite worm-like organism with a clever name, however, is the banana slug! 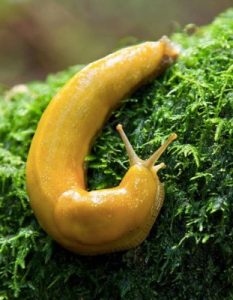 Banana slugs are terrestrial slugs found in the coniferous rainforests along the Pacific coast of North America. Chances are that if you have ever been hiking in these forests between Southeastern Alaska and Santa Cruz, California (they are the college mascot at UC Santa Cruz!) you might have even seen a banana slug along the trail. As their name hints, banana slugs bear a strong resemblance to bananas. Most are bright yellow, but some appear brown, tan, or white, and Pacific banana slugs (1 of the 3 species of banana slugs) sometimes have such extensive black spots on their bodies that they look entirely black – like a banana well past its prime! The color of an individual slugs depends on the food it consumes, the moisture levels of the environment, its health, and its age.

While most slugs are generalists, which means they eat a wide variety of organic materials, banana slugs are detritivores and decomposers, which means they eat dead organic material and return nutrients to the environment. As detritivores, they are important to maintaining a healthy ecosystem. After consuming mushrooms, seeds, leaves, moss, and other dead organic matter, they excrete a nitrogen rich fertilizer which helps facilitate a healthy nutrient cycle in the environment.

Perhaps the most interesting thing about banana slugs is their slime. Their bodies are covered in secreted mucus that actually contains chemicals that function as an anesthetic, numbing the tongue of anyone who dares to eat them, or even lick them. For this reason, banana slugs are known to have no natural predators! They are occasionally hunted by raccoons, snakes, ducks, geese, and salamanders, but these predators have to roll the slugs in soil before eating them in order to avoid direct contact with their numbing, slime-covered bodies. Humans aren’t immune to the anesthetic mucus either, and among hikers in the Pacific Northwest a common dare might be something along the lines of “I dare you to lick that banana slug!” This anesthetic slime is a wonder to most and researchers hope to learn more and potentially apply the science behind the mucus to develop improved surgical implants and wound coverings.

So, if you ever find yourself in the forests along the Pacific Northwest of the United States, look around on the ground and you might spot a banana slug crawling along, and if you are feeling especially like a dare devil, perhaps you will even lick it!

Article Name
If You Lick a Banana Slug Your Tongue Goes Numb!
Description
If you ever find yourself in the forests along the Pacific Northwest of the United States, look around on the ground and you might spot a banana slug crawling along, and if you are feeling especially like a dare devil, perhaps you will even lick it!
Author
Dori Franklin
Share the knowledge