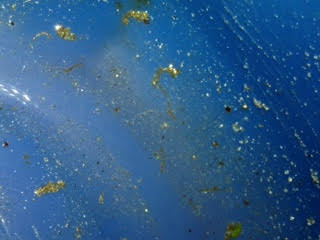 Today we will respond to one of our readers in Florida. She wrote to us about some interesting creatures she noticed in her animals’ water bucket that she thinks might be mosquito larvae. She wrote, “I’ve never seen this before, the worms have made mucus-looking huts/tunnels all over the bottom of the bucket. The worms look pink when they get bigger and brown when they are smaller. When they are calm they swim in slow S-shape motions, but when they are disturbed they jerk around. They were hiding in their tunnels until I dumped the bucket.” Along with this detailed message, our reader included two photographs. The first shows a bunch of gold particles in the bottom of the bucket: 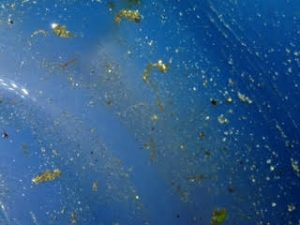 We aren’t sure if the gold areas are the worm-like organisms or the tunnels/huts our reader mentioned. We don’t really know what we are looking at, which makes it hard to attempt to make an identification. In the next photo there aren’t the bigger gold areas, instead it just looks like dirty water in the bucket: 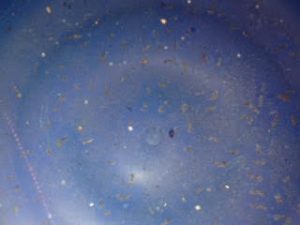 Two other worm-like organisms that are sometimes found in water buckets include horsehair worms and bloodworms (midge fly larvae.)  However, neither of these form the tunnels/huts that our reader described. Also, both have distinct appearances that we think our reader would have described if they were what she noticed swimming in the water bucket.

All in all, we don’t know what our reader has found in her animals’ water bucket. Despite the photos and description, we are having a difficult time visualizing the mucus tunnel/huts and associating them with any worm-like organisms that we are familiar with. If any of our other readers have any ideas about what these specimens might be, we invite them to comment below. As far as dealing with the situation, we recommend that she clean out the water bucket and keep it empty or covered when it isn’t being used.

Article Name
Are Worms in Water Bucket Mosquito Larvae?
Description
Today we will respond to one of our readers in Florida. She wrote to us about some interesting creatures she noticed in her animals' water bucket that she thinks might be mosquito larvae.
Author
Dori Franklin
Comments: 0 Posted by: Worm Researcher Dori Categories: Garden Worms