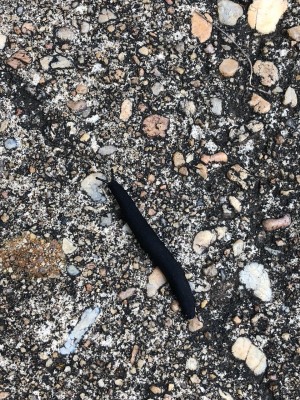 We recently received a photograph of a black worm-like organism on asphalt. The reader who sent the photo asked the classic question, “What is this?” The specimen is smooth, black, and has two tiny appendanges coming off its head. We are confident that this creature is a slug! 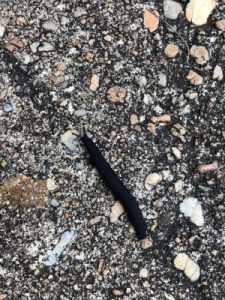 Slugs aren’t worms, they are actually terrestrial mollusks. Most mollusks have shells, but slugs don’t. Instead they have tough skin and secrete a mucus film for protection. The two appendages coming off the slug’s head aren’t antennae, they are optic tentacles. Slugs can move their two optical tentacles independently of each other to look around at their surroundings and to use for smelling. Slugs have two smaller sensory tentacles below their optical tentacles that they use for feeling and tasting. Most slugs are generalists, which means they feed on a wide range of organic materials, but some slugs have predatory eating habits and consume other slugs, snails, and earthworms.

In conclusion, we are confident that the black worm-like organism our reader discovered is a slug. We think it could potentially be a black slug or a black velvet leatherleaf slug!

Article Name
Black Worm On Asphalt Is A Slug
Description
We are confident that the black worm-like organism our reader discovered is a slug. We think it could potentially be a black slug or a black velvet leatherleaf slug!
Author
Dori Franklin
Share the knowledge

This many people searched for this info: 1,194