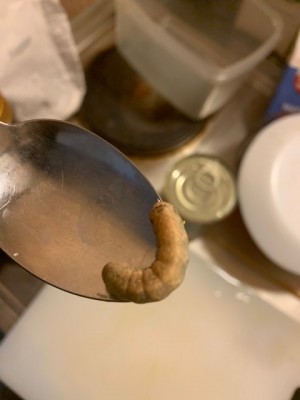 One of our readers recently reached out to us from Denmark. She explained that she found a little brown caterpillar on some organic broccoli she bought. Based on its plain brown color and lack of features, she thinks it is probably a cutworm, but she wants us to weigh in on its identity: 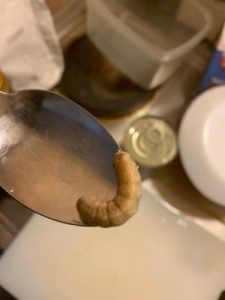 Cutworms are the larvae of moths in the Noctuidae family. The caterpillars hide in the soil during the day and then come out at night to feed. They typically eat stems, cutting the plant down in the process, which is how they get their name. 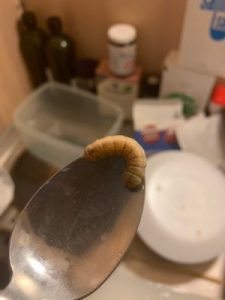 Depending on the species, cutworms might be brown, grey, yellow, or green. We agree with our reader that this might be a cutworm! The other caterpillars that are known to feed on broccoli are cabbage worms, cabbage loopers, and diamondback worms. All of these specimens are green, so likely not what our reader has discovered. Of course, it is also possible that this caterpillar doesn’t eat broccoli, and just wandered from another plant onto the broccoli that our reader bought.

We want to touch on a point we have covered in several other articles about caterpillars. Caterpillars can be really difficult to identify because two of the same species might look quite different, while two of different species might resemble each other quite closely. So, while we agree that this is likely a cutworm, we don’t know which species it is, and there is also the possibility that it is actually a different brown caterpillar. Usually, when readers find cutworms they are concerned because cutworms are generally considered agricultural pests and can be a real nuisance. In this case, however, our reader doesn’t have anything to worry about since she discovered the specimen on a vegetable she purchased and not one she grew!

To wrap up, today we responded to a reader who found a brown specimen on some store bought broccoli. We agree with our reader that the creature is likely a cutworm, which is a type of caterpillar.

Article Name
Brown Caterpillar Discovered Hiding in Broccoli
Description
Today we responded to a reader who found a brown specimen on some store bought broccoli. We agree with our reader that the creature is likely a cutworm, which is a type of caterpillar.
Author
Dori Franklin
Comments: 0 Posted by: Worm Researcher Dori Categories: Caterpillars