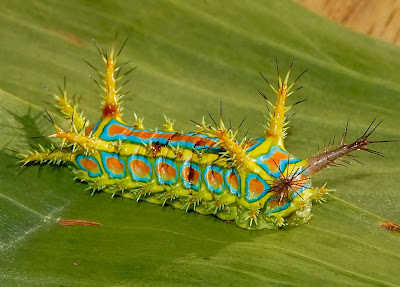 “When you think of worms and worm-like creatures, maybe the word ‘beautiful’ isn’t the first word that comes to mind” is how we introduced our first article on this very same topic. However, and we hope, that after having read the first article, this statement may no longer rings true for our readers. This article will address three more stunning caterpillars in a further attempt to expose people to the aesthetic wonders of the world of caterpillars!

Let’s jump right in with the sycamore moth caterpillar. The sycamore moth is found in the Southern regions of England, and in its adult form is a mottled gray color, its ‘fur’ almost resembling the feathers of an owl. It is then strange that the caterpillar should be so colorful; it almost looks like they could not be related in anyway! The sycamore moth is part of a family of moths called Acrotinictinae, more commonly referred to as ‘Dagger moths’. The sycamore moth is often confused with the American dagger moth. The caterpillar of the sycamore moth, which can grow up to 4cm in length (approximately 1.6-inches) is primarily yellow in color, but has mingling tufts of orange interspersed along its body. Additionally, the caterpillar’s ‘spine’ is white in color, with a pattern of pentagon-like shapes of white lined in black, making this caterpillar a sight to see. We think it resembles a Dr. Seuss character! The caterpillar feeds on the vegetation that grows on aspen, willow and poplar trees. You are most likely to encounter these caterpillars during the summer; they might even fall out of the tree onto you, as that is quite a common occurrence! 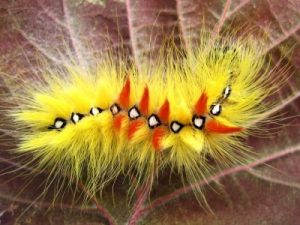 Next, we have the Cecropia silkmoth caterpillar. When we first laid eyes on this critter, we thought the photograph was fake. Otherwise referred to as the ‘Christmas lights caterpillar’, this green/white caterpillar has bulbs of various colors adorning its body. It also has white spots along the sides of its body. Despite its bulbs having small black bristles, this caterpillar is not recorded as being dangerous to handle by humans, though we cannot ensure that allergic reactions may not occur when holding one; this is a risk when touching any caterpillar, or any animal for that matter. WormSpit.com actually recorded the entire lifecycle of the cecropia silkmoth, which is just incredible to see, with detailed photographs and descriptions of the caterpillar’s every instar. Although the color intensity does vary depending on which stage the caterpillar is at, their yellow, red and blue bulbs make this caterpillar a wonder to behold. The adult moth, which is North America’s largest, is equally beautiful, being a blend of blacks, grays, whites and reds, making it look as regal as can be.

Finally, we have another caterpillar which we can barely believe is real, namely the wattle cup caterpillar. This caterpillar’s color range and shape is so surreal to behold, it looks like it was sculpted out of glass. Like the sycamore moth, the adult moth of the wattle cup caterpillar is quite boring by comparison, being a uniform white, with some speckles of black on the tips of its wings. This caterpillar is legless, moving much like a slug does, by contracting its underside muscles to pull itself forward. What we find ironic about this caterpillar is that although its coloration looks like it could be pulled straight out of a cartoon, its impressive bristles are venomous and should not be touched. If one were to touch one of these caterpillars, they would be met with a sting more painful than that of several wasps. Thus, this caterpillar is better admired from afar, which for us is more than enough. Just a picture of one these caterpillars is enough to leave one’s jaw on the floor; imagine seeing one up close! 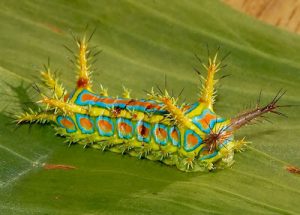 In conclusion, this has been another article on beautiful caterpillars. We hope our readers enjoyed this second installment in what could potentially be a short series of articles, were our readers to be interested in that. Anyone is free to voice their requests in the comments below. We would also be interested to hear from anyone who has seen any of these caterpillars in real life and if they have any photographs they would like to share! Other than that, we hope everyone is staying safe and cozy.

Article Name
Three of the Most Breathtaking Caterpillars (Part 2)
Description
"When you think of worms and worm-like creatures, maybe the word ‘beautiful’ isn’t the first word that comes to mind" is how we introduced our first article on this very same topic. However, and we hope, that after having read the first article, this statement may no longer rings true for our readers. This article will address three more stunning caterpillars in a further attempt to expose people to the aesthetic wonders of the world of caterpillars!
Author
Worm Researcher Anton
Share the knowledge

This many people searched for this info: 1,021