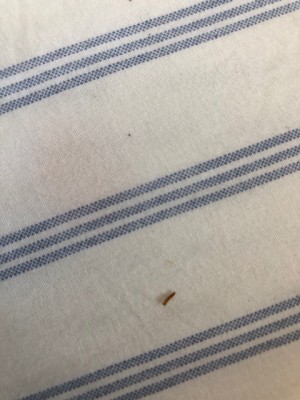 Today we will attempt to answer the classic question, “What is this?” Along with the question, our reader sent a photograph of a small orange worm-like organism on what appears to be some sort of linen. It might be a napkin, a pillowcase, a bedsheet, a shirt, or something else: 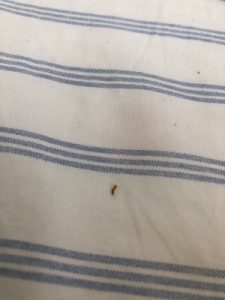 The specimen is tiny! Since the photo is taken relatively far away from it, we can’t any details about the appearance of this creature. We don’t know if it is smooth, hairy, or segmented. We can’t see any legs, antennae, or appendages, but that doesn’t mean they aren’t there. Sometimes we can still identify a creature without knowing very much about what it looks like, but we usually need other details to supplement that information.

For example, knowing where specifically the worm-like organism was discovered in our reader’s home can be incredibly useful. Since different species of creatures eat different things, the specimens found in a bedroom aren’t usually the same as the organisms found in the bathroom.  Knowing which room our reader found this creature in, and on what material, could be key in determining what this is. If our reader found this specimen in her bedroom, it might be a carpet beetle larvae. If she found it in her kitchen, it could be a mealworm. Or it might be a type of caterpillar. We just don’t know.

Without knowing more about this creature, we, unfortunately, can’t identify it or inform our reader about how to deal with it. Some creatures that readers find in their homes are household pests that will camp out and stay a while unless deterred, but others are specimens that generally prefer the outdoors and end up inside a home accidentally or by chance. For example, while earthworms are found fairly regularly in reader’s toilets, they aren’t household pests and they are more often discovered in the outdoors. Carpet beetle larvae, on the other hand, are common household pests that need to be eradicated immediately if discovered since they can be destructive.

We can’t identify the orange worm-like organism our reader found based on the photograph alone, but if our reader is still curious about this specimen, we invite her to send in a detailed description about what the specimen looks like and where she found it!

Article Name
Orange Worm Remains a Mystery
Description
Today we will attempt to answer the classic question, "What is this?" Along with the question, our reader sent a photograph of a small orange worm-like organism on what appears to be some sort of linen.
Author
Dori Franklin
Share the knowledge

This many people searched for this info: 2,310