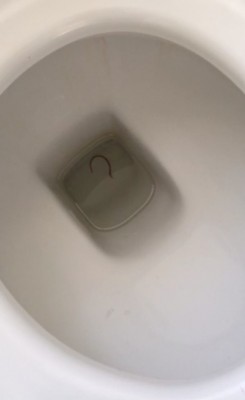 We recently heard from a reader in London. She explained that she found a worm in her toilet bowl one morning, and she knows the toilet wasn’t used since the night before. She is curious about the identity of the worm and why it might be in her toilet. From the photo, we can see that the worm is quite small. It appears to be brown, thin, and 1-2 inches long. 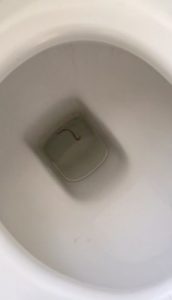 First off, since our reader specifically clarified when the worm was found, we can safely say we don’t think there is any chance this is a parasitic worm that came from her or anyone in her family. The worm was found hours after anyone had used the toilet, and the toilet is clearly filled with water, not urine or feces. That being said, since we aren’t medical professionals and can’t give medical advice, we have to cover our bases and mention that if our reader is worried about her health or thinks this might be a parasite, then she should see a doctor ASAP.

The three most common worms that readers find in their toilets are drain fly larvae, bloodworms (a.k.a. midge fly larvae), and earthworms. We think the creature is too big to be a drain fly larva, but it might be a bloodworm or an earthworm. Bloodworms are small, thin, red worms that feed on organic material and need moisture in order to survive. If this is a bloodworm, then our reader will need to give her toilet a thorough cleaning using a cleaning agent and a pipe cleaning brush. Once she has scrubbed out the grime that has built up in her toilet bowl and pipes, she shouldn’t find any more bloodworms!

It is also possible that the specimen our reader found is an earthworm. Earthworms are the most common worm-like organism that readers find in their toilets. The creature our reader found looks a little on the small side for an earthworm but it could just be a small earthworm! Like bloodworms, earthworms need a wet environment to survive and they can even live submerged underwater for long periods of time! We believe earthworms usually end up in toilets after they slip through a small gap in the plumbing system. As long as our reader only found one worm, she doesn’t need to worry. She can simply remove the worm and place it back outside.

To conclude, we think the creature our reader found in her toilet could be either a bloodworm or an earthworm. It is also possible that it is a different species entirely, but these are two of the most common worms found in toilets, and they share some resemblance to the organism our reader found.

Article Name
Worm In Toilet No Cause For Alarm
Description
We think the creature our reader found in her toilet could be either a bloodworm or an earthworm. It is also possible that it is a different species entirely, but these are two of the most common worms found in toilets, and they share some resemblance to the organism our reader found.
Author
Dori Franklin
Share the knowledge