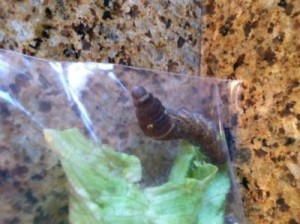 The particular caterpillar our reader found is likely in one of the first three instars of the creature’s development. (Instars are stages of development in between each molt that occur before the creature reaches sexual maturity.) The caterpillar is brown during these instars, and then during the fourth it takes on a vibrant green color. Right before it pupates, however, it turns brown again, so it’s also possible that this is the stage of the caterpillar’s development. In any case, it’s obviously in the larval developmental stage, moving toward its eventual evolution into a butterfly.