We received a question from a reader about a very strange-looking creature she found on her driveway. Although we aren’t completely certain, it looks like a caterpillar; in any event, it looks more like a caterpillar than any other creature, and besides that, we’re pretty sure it’s a caterpillar anyway, to be as convoluted about our relative certainty as possible. The caterpillar is brown and green – more precisely, it is a mix of brown and green, which almost makes the caterpillar look like it is covered in moss. The caterpillar also has two large “eyes” (in fact, they are eyespots, which are faux eyes), and near these “eyes” is a yellow line or stripe that appears to wrap around the creature. The reader was quite alarmed by her find, writing to us “WHAT IS THIS?!?!,” and also urgently asking “Can someone HELP”? (Emphasis not added.) The reader also thought she found a caterpillar, but then became uncertain when she examined what she had found up close. What is this brown, green caterpillar she found (if indeed it is caterpillar)?

First, here is a nice close-up shot the reader sent us: 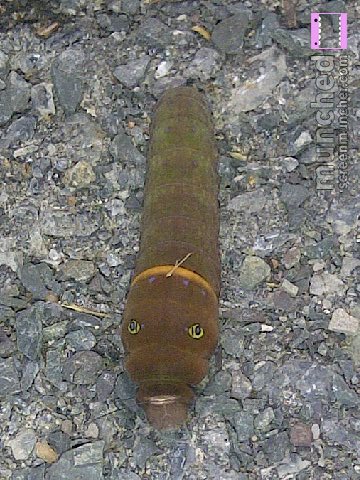 (In case you’re curious, the emblem on the right of the picture is for Screenmuncher, a screen capture app for Blackberry. The publisher of All About Worms also publishes a site about technology and the Internet – one of many other sites – so the writers who work for her are often knowledgeable about at least a few topics.)

The creature in the picture is definitely a little startling (at least up close), so we don’t blame our reader for her alarm. What she might have found alarming about it are the two spots that look like eyes. As we mentioned above, these actually aren’t real eyes. Rather, they are eyespots, and they serve as a defense mechanism, scaring away predators like birds who might feed on them. These are fairly common on caterpillars, which is one reason we think our reader found a caterpillar.

In any case, it definitely appears that our reader found some type of Tiger Swallowtail caterpillar, and there is no reason for her to be scared by them, as they won’t cause any harm.