Have you ever found small worms in your food? One of our readers from Northern California has, as we recently received a question about a tiny, dark worm that this reader found in her coffee grounds. (By “dark worm,” we mean that the color of its body is dark, not that its outlook is Schopenhauerian.) The worm (or what is believed to be a worm; in fact, it’s probably some sort of larva) is simultaneously described as “tiny” and “long,” so it is presumably long relative to its thin width, and is not long in absolute terms (which is actually a nonsensical concept, as something is long only in relation to something else). Any time people find worms in food, we suspect a few creatures. Waxworms or wax worms, which are the larvae of Indianmeal Moths (a.k.a. “pantry moths”), are commonly found in foods, as are flour beetles (and their larval form, known as “flour beetle larvae,” naturally). We’re not sure if our reader found either, but this is as good a place as any to talk about these two common “worms” found in food.

First, here is a picture the reader sent us of the creature she found: 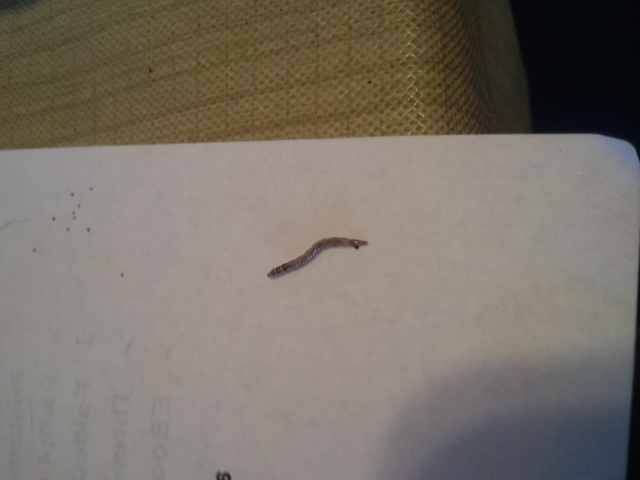 The first possibility we mentioned above is that this is a so-called “waxworm,” which is a term that refers to the larval form of a few different types of moth that belong to the family Pyralidae, like the Indianmeal Moth (or pantry moth) mentioned above. Perhaps the best-known waxworm – i.e., the larval form of the wax moth – is bred as an animal food (largely as fish bait or bird feed), but the larval form of the pantry moth is not bred for this purpose. Rather, pantry moth larvae are common pests that are found all over the world. These larvae tend to be a little whiter than the creature pictured above – pantry moth larvae look almost exactly like maggots, in fact – but not all of them are. One other complication with this suggestion is that pantry moth larvae are primarily known for eating grains, but once they infiltrate a kitchen or pantry, they could be found in any number of different foods that aren’t in airtight containers.

Our reader might have also found a type of flour beetle larvae. Flour beetles are a type of darkling beetle, of which there are over 20,000 species. More precisely, flour beetles belong to the Tenebrio genus. The larvae of one species of beetle in the Tenebrio genus – the Tenebrio molitor – are known as mealworms, which are widely known because they, like the certain type of waxworm mentioned above, are commonly used for animal food. The several types of flour beetles (including the Tenebrio molitor) are known for consuming wheat and other types of grain, but we suppose that they – as well as the larvae they give birth to – could be found in coffee grounds, especially if they got into the grains in the kitchen first. Flour beetle larvae, which tend to be darker than pantry moth larvae, do look like the creature above, but they have three small pairs of legs behind their heads, and it is not clear if our reader’s creature has this same feature.

Unfortunately, we aren’t entirely sure what small “worm” our reader found in her coffee, but pantry moth larvae and flour beetle larvae are the best guesses we can muster. Both are common pests found in food, and they both look approximately like the creature of which our reader sent us a picture.

1 thought on “Small Worms in Food”