A reader from Philadelphia wrote to us a while ago about some small, red worms he found in a “tree” (although the reader’s description suggested it was more like a bush). He said the worms looked a bit like earthworms, but that they were smaller, measuring about one or two inches in length. The reader also said the worms were thin. This is an instance where we really wish we had a picture. We are not only having difficulty imaging what this worm (or whatever it may be) looks like, but we also can’t picture the type of plant on which one of these creatures might be found. Based on what little we do know, it seems that our reader might have found grubworms (often spelled “grub worms,” and they are also known as “white grubs” or simply “grubs”). Grubworms are very common and are frequently found consuming plants, especially turfgrasses. We don’t know for sure if our reader found grubworms, but we can at least supply a little information about these common, plant-eating creatures.

Like so many other so-called “worms,” grubworms are actually not worms. Rather, they are the larvae of scarab beetles, which are often simply known as “scarabs.” Scarabs are part of the large family Scarabaeidae, which has over 30,000 species in it. This classification isn’t stable, however, because there are numerous competing theories as to how to properly classify the various species in this family. With so many species, there is a lot of diversity in the family Scarabaeidae, but these beetles are generally characterized by their clubbed antennae, metallic colors, and short bodies. (They are sometimes called “stout.”)

As we said, grubworms are the larval form of scarabs, so grub worms are not fully mature. Grubworms tend to be about one inch long, which is consistent with what our reader said of the creature he found, and their bodies curve into the shape of a “C.” They have three pairs of legs, one for each of the first three body segments that come after the head. Grubworms are for the most part a grayish color with a brown head, and we have only ever seen grubworms that look like this, but some research online turned up pictures of grubworms that look to be a reddish brown hue (similar to the creature our reader found). However, every one of these images depicts grubworms for sale (they are eaten in places like Thailand, e.g.), meaning they might be cooked or seasoned, so we’re not sure if the worms in these images have their natural color. Here is one picture of cooked grubworms: 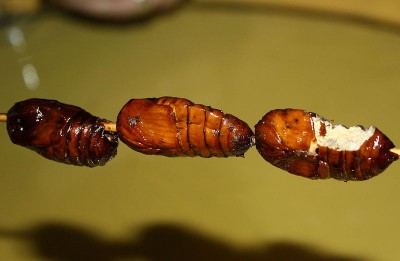 Another thing you’ll notice about these grubworms and many others is that they are plump – they do grow into “stout” beetles, after all – and the creatures our reader found were thin. But some grubworms are skinny, so our reader still might have found grubworms despite their thinness.

While grubworms pose no threat to humans, they can ruin plants. They consume the roots of turfgrasses and a few other types of plants. This can leave plants and turfgrass wilted and droopy. When turf is attacked by grubworms, it can often turn a color that is almost gray. The patches of afflicted turf will stand in stark contrast to any surrounding turf that is healthy.

The reader did ask if he should “do anything” about the creatures he found, but since we aren’t even sure he found grubworms, we don’t really have any advice to offer on this front. If people have lawns to protect and they have a serious grubworm problem – one that won’t be kept in check by grubworms’ natural enemies, such as ants – then they will often seek out some sort of chemical remedy, but in general we don’t recommend such measures (plenty of other places online have lots of information about this approach, however).

The small, red worms (or “worms”) our reader found may or may not be grubworms. The reader’s description of the creature he found partially matches the grubworm, but not perfectly, and without additional information we can’t say much else. We can say, however, that it is as likely as not that he found some sort of larvae, not an actual worm, as worms generally don’t climb trees or shrubs.

This many people searched for this info: 2,188