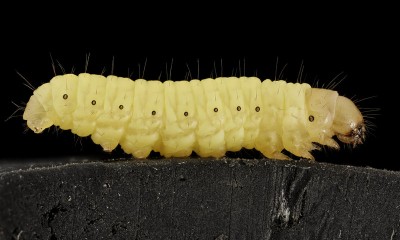 A man who experienced a bee swarm inside the brick wall of his house later discovers worms in his living room. According to our reader, the worms are small, maggot-like worms, and they seem to be coming from under the “plates” of the living room, which we assume refers to the floor of the room.

Have you ever found small worms in your food? One of our readers from Northern California has, as we recently received a question about a tiny, dark worm that this reader found in her coffee grounds. (By “dark worm,” we mean that the color of its body is dark, not that its outlook is Schopenhauerian.) The worm (or what is believed to be a worm; in fact, it’s probably some sort of larva) is simultaneously described as “tiny” and “long,” so it is presumably long relative to its thin width, and is not long in absolute terms (which is actually a nonsensical concept, as something is long only in relation to something else). Any time people find worms in food, we suspect a few creatures. Waxworms or wax worms, which are the larvae of Indianmeal Moths (a.k.a. “pantry moths”), are commonly found in foods, as are flour beetles (and their larval form, known as “flour beetle larvae,” naturally). We’re not sure if our reader found either, but this is as good a place as any to talk about these two common “worms” found in food.

Wax worms look like dull white caterpillars. They have thick bodies and a dark head. After mating, the female wax worm will lays her eggs and the cycle will begin again.

According to the Cornell Waste Management Institute of the famed Cornell University, worms do not bite. In fact, in nature wax worms do not feed on anything but pollen, honey, cocoons, and beeswax. Wax worm breeders have no problems feeding their inventory of wax worms without the help of pollen and cocoons. These squirmy little creatures can also survive off of an artificial diet of a mixture of dog food, water, and honey or a mixture of Gerber’s mixed cereal, glycerin, honey, and water.