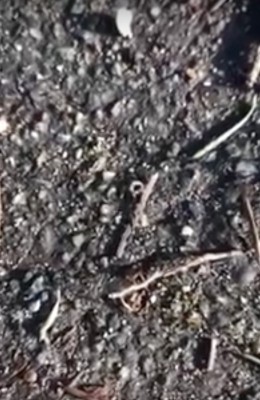 A reader recently sent us a photograph and the accompanying question, “Can you identify this?” She wrote that she noticed quite a few of these worm-like organisms on her sidewalk. They are approximately 1 cm long. She also wants to know if these creatures are something she should be worried about. Here is the photograph she sent: 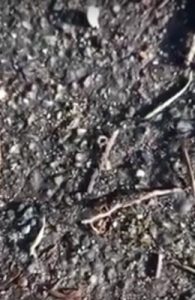 The worm-like organism nearly blends in with the sidewalk, but you can see its small, white body next to the stick in the center of the photograph. We don’t have very much to work with as far as figuring out the identity of this worm goes. We do have the photo, but it doesn’t display any details. We also know that the specimen is white and about 1 cm long, but that description can apply to hundreds of different worm-like organisms. Sometimes we are able to make an identification (or at least offer an educated guess) using even less information. Unfortunately, this isn’t one of those situations. We are unable to offer an answer to what kind of organisms our reader has found on the sidewalk.

We are at least able to rule out the two most common worms that readers find on their sidewalks. We are confident that these small white worms are not earthworms or bloodworms! Earthworms and bloodworms have both been discovered after heavy rains wiggling across sidewalks, driveways, and patios. However, both are reddish colored, not white like the organisms we are trying to identify now. We think these creatures might either be beetle larvae or fly larvae, both of which can be white and small. But this doesn’t really get us any closer to being able to tell our reader what she has found. So, without identifying the creatures, we aren’t able to answer her other question regarding if these worms should be a cause for concern or not. That being said, we don’t think our reader needs to stress about the presence of these worms. Although we can’t say this with absolute certainty, the sudden presence of these creatures is likely due to a recent change in the environmental conditions and not because of anything alarming.

In conclusion, one of our readers is curious about the small white worms she found on her sidewalk. We don’t know what kind of creatures she is dealing with, but we don’t think she needs to worry about their presence.