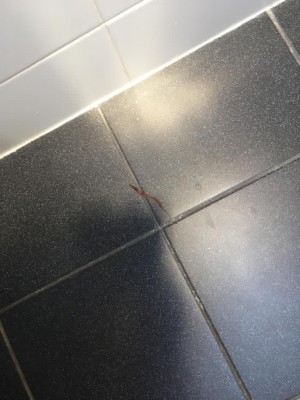 A concerned woman recently wrote to us about her mom’s discovery of worms in her bathroom. The worm in the picture below appears to be pink and brown in color, and is a long, tubular shape. 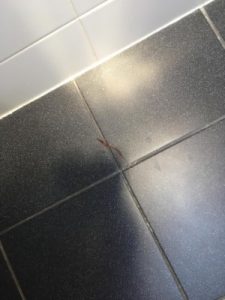 In addition to the photograph, our reader sends a lot of context, which we are always grateful for. She says that for the past couple of months, her mother has been finding one-to-three worms a week, in a variety of sizes. The one in the picture is the largest one she found. Her ‘mum’ is based in Devon, UK in an old, first floor apartment. The bathroom in which the worms were found was “probably fitted about 10 years ago” before her mother moved in there. The bathroom contains a shower, toilet, bath and wash basin. “The bathroom is kept spotlessly clean and she uses bleach in the toilet on a very regular basis.” Her mother has become “very disturbed” by the appearance of the worms and has no idea where they might be coming from. When she finds a worm she “picks it up in a tissue and throws it outside”, subsequently cleaning the area where the worm was with vinegar or bleach. Although most of the worms have been found on the bathroom flour, she has also found a few in her open shower cubicle. Our reader concludes her submission by stating an apparent coincidence, which is that the worms “seem to appear following heavy rain.” In actual fact, this might be the most important part of the context.

To us, this looks exactly like an earthworm, and that is what we think these worms are. This identification is based mostly on appearance, but also on the context surrounding their appearance. Earthworms have been known to show up in people’s bathrooms for various reasons; one such reason is that the given bathroom is unkempt and the worms are thus attracted to the build-up of decaying organic materials. We can rule out this possibility seeing as our reader’s mother has been meticulous about keeping her bathroom clean. The other most likely possibility is that there is a leak somewhere in the piping. We think that it is likely there is a leak in the pipes connected to the pipes leading to the shower, which would explain the appearance of worms inside the shower cubicle (the ones on the floor have probably just crawled away from the shower). Our guess is that the leak is underground, rather than in the pipes in the walls. This is because of the last piece of context in our reader’s submission, that the worms come after heavy rain. Earthworms are known for coming up to the surface after heavy downpours, and so it would only make sense that the earthworms are finding the leak in the pipe on the way up to the surface after a rain shower. To help with this, there is not much more our reader’s mother can do but call a plumber to search for a leak, as that is the primary problem here. Otherwise, earthworms have no reason to infest a home.

We hasten to add that earthworms are in no way a danger to people, and in fact they are not only benevolent, but actually beneficial creatures, so we encourage our reader to gently remove these unwanted visitors and place them outside in the soil.

In conclusion, the worms our reader’s mother has been finding in her bathroom are earthworms. The discovery of these creatures implies that there is a leak somewhere in the pipes leading to the shower. We hope that this article proves both insightful and helpful to our reader and her mother, and we wish them the best of luck!

Article Name
Pink & Brown Worms Crawling Up From Shower Drain are Earthworms
Description
A concerned woman recently wrote to us about her mom's discovery of worms in her bathroom. The worm in the picture below appears to be pink and brown in color, and is a long, tubular shape.
Author
Worm Researcher Anton
Share the knowledge