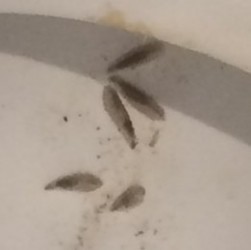 A reader wrote to us a few days ago about some tiny larvae he is finding in his toilet bowl. He specifically asked if they are moth fly larvae, which we think is likely. The reader asked where they come from, and he also asked how to “get rid of them for good,” which perhaps suggests he has had this problem before. First we’ll discuss why we think what he found is moth fly larvae, and then we’ll move on to address where they came from and how to get rid of them.

The reader sent us a couple of pictures, but this one shows the creatures up close:

There isn’t much scale in this picture, but we know these creatures are quite small – the reader emphasized it, and the image taken from a more distant vantage point, which shows most of the toilet, indicates this as well. Moth fly larvae tend to be only about a quarter of an inch (half of a centimeter) long, which seems to be about the size of the creatures pictured above. More generally, moth fly larvae, and indeed fly larvae in general, look like the creatures above as well. Finally, the fact that the larva were found in a toilet also fits perfectly with the moth fly larvae suggestion, as this is exactly the type of habitat – moist with decaying organic matter – in which one should expect to find them. In fact, we have specifically written about moth fly larvae in toilets before. Thus, we think it is likely that our reader found moth fly.

The reader’s other questions – about where they came from and how to get rid of them – are of course related. The reader’s toilet bowl has proven to be an inviting habitat for the larvae, and this is why they are there, and the reader needs to make his toilet bowl less inviting, and this is how he will get rid of them. Fortunately, getting rid of them is fairly straightforward, as it is basically only a matter of maintaining a clean environment, one free from the type of organic matter that they live off of. Naturally, this requires cleaning the toilet bowl itself, but it might also involve cleaning out the pipe beneath the toilet since the larvae tend to accumulate in places where there are clogs or partial clogs. A plumber’s snake, which is basically an elongated toilet brush, can be used for this, and sometimes just using a plunger can dislodged any accumulation in the toilet. If the reader is able to clean the toilet well and maintain this level, the larvae should be taken care of “for good.”

So, to recap, we think our reader found moth fly larvae, and we think the best way to deal with them is clean his toilet thoroughly, including the pipe beneath it. If he does this, he shouldn’t have any more problems with moth fly larvae.

Article Name
Moth Fly Larvae in Toilet
Description
A reader wrote to us a few days ago about some tiny larvae he is finding in his toilet bowl.
Author
All About Worms
Comments: 0 Posted by: Worm Researcher Evan Categories: Gross Worms