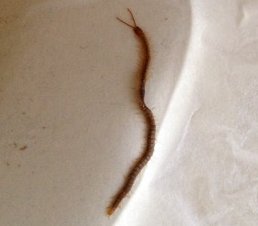 Worms, Centipedes, or Millipedes in the Coffee Maker

A reader wrote to us recently about a worm-like creature “squirming in my coffee carafe while rinsing with water.” The reader was alarmed by this because she is “truly phobic about worms,” and she also reports that she thinks what she found is a millipede. For reasons we will come to shortly, she might have actually found a centipede, but in truth she wasn’t particularly concerned about what she found. She was more fixated on where the centipede (or millipede) came from, and she also wanted to know if there could be more and how she should eliminate them. We’ll try out best to identify and address all her concerns below.

First, here is the picture the reader submitted along with her questions:

This is definitely either a millipede or centipede, which are both arthropods belonging to the Myriapoda subphylum. The two are similar and in everyday speech people might use the terms more or less interchangeably – they are both the creatures with lots of legs – but there are distinctions between millipedes and centipedes. In this case, we are leaning toward a centipede identification because it has fairly long antennae and if you look really closely at the picture above, the creature appears to have only one pair of legs per body segment (although we definitely aren’t certain of this). Millipedes have shorter antennae that are often hard to see, and they also have two pairs of legs per body segment (except for on the first three body segments, which only have one pair each). Moreover, the legs of the creature above kind of extend away from the creatures body, which is more in line with it being a centipede than a millipede, the latter of which have legs that are often completely underneath their body. However, the creature’s legs don’t extend very far from the creature’s body, so we can’t use this as a very strong indication either way. Overall, then, we are unsure exactly what our reader found, but again, we are slightly leaning toward the centipede identification.

As we said above, the reader wasn’t especially concerned with identification, so we don’t want to dwell on it for too long, but it is worth noting that centipedes (unlike millipedes) can bite. They use their forcipules to pierce skin and inject venom, although only larger species could do this to a human, and of course they would do it for defense, not as some sort of preemptive attack. We don’t want to alarm the reader with this information because she might have just found an errant centipede (or potentially a harmless millipede) in her house that presents no threat, but it indicates that what you find matters, and unfortunately we can’t say one way or the other if she found a centipede or millipede with certainty.

In any case, the reader wants to know how the creature entered her house, and unfortunately this is extremely difficult question to answer because there are so many different possibilities. Since the reader found it in her coffee carafe, she floated the idea that it came through the faucet of her sink or from a sponge in a “ceramic crock.” (The latter’s connection to the coffee maker is unclear.) She also wondered if, worst of all, the creature might have “somehow come from the coffee maker” itself. We aren’t entirely sure how to make sense of these suggestions because we don’t really know any creature can “come from” these objects (except for maybe through a faucet, but that can’t be the case in this instance). We suspect the centipede (or whatever it is) just climbed into the coffee carafe, and that the creature itself came from outside through some entry point into the house. It might have been attracted to a food source inside the house (insects for centipedes, dead plant matter for millipedes), or perhaps to a higher level of moisture inside.

At this point, since the reader has only found a single creature, we think she should simply get rid of it and not worry too much about a larger problem – there may be no such larger problem. It’s basically impossible to completely eliminate all creatures from getting into your house, and finding something from time to time is nothing to be concerned about. One can take obvious steps to help keep pests at bay – cleaning is important, for example, and you shouldn’t leave doors and windows without screens wide open for long periods of time – but finding a single centipede (or millipede) isn’t cause for concern. So, for now, our reader has no reason to panic, but if she keeps finding centipedes or millipedes, then she can start exploring control measures. She can write to us again for such measures, or she can look at the many resources online that explain how get rid of basically any house pest.

Article Name
Worms, Centipedes, or Millipedes in the Coffee Maker
Description
A reader wrote to us recently about a worm-like creature "squirming in my coffee carafe while rinsing with water."
Author
All About Worms
Comments: 1 Posted by: Worm Researcher Evan Categories: Pest Worms