Group of Worms or Maggots

A little while ago, a reader wrote to us about a strange phenomenon he had witnessed: he found a group of worms, or what appears to be a group of worms (they may not actually be worms), on his driveway. He sent us a picture of his find, which seems to show a section of the of group worms; they are all oriented in the same direction, almost as if they were collectively forming the shape of a huge worm. However, the reader described what he found as a “cluster of worms,” so perhaps the worms are less well organized than it appears. It’s a striking find, so naturally our reader is curious what he found, and if they present a danger to his kids. What is this group of worms, if they are worms, and are they dangerous?

Update: Our reader may have found fungus gnat larvae, which are in fact fly larvae, as we speculated below. Readers who found the present article should also read our more recent article to see if it helps with their identification.

First, as always, the picture, which shows the reader’s find about as well as anything could: 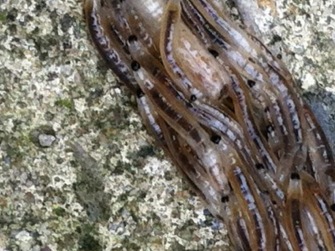 Although we can’t be sure, these creatures appear to be maggots of one variety or another. Maggots are the larval form of flies (and so are not worms), and since there are many types of flies, there are many types of maggots. (And there truly are many types of flies: they make up the order Diptera, which contains around 240,000 species.) The most common maggot is the larval form of the housefly (Musca domestica), which is overwhelmingly the most common fly found in houses around the world. However, these larvae are a white or slightly off-white color, which doesn’t match the creature above. Our reader’s find looks more like moth fly larvae, which are maggots (although they are generally just called “moth fly larvae”) that we have written about numerous times. People often find moth larvae around their houses near drains and pipes.

In any case, it does seem that our reader found some sort of maggot, although we aren’t entirely sure what kind it is. Interestingly, a reader has written us before about maggots traveling as a group, so this lends further credence to our hypothesis. On the other hand, we have also received a question about annelids crawling together, so we suppose it’s possible he did in fact find some type of worm. We don’t know of any annelids that look like the creature pictured above (but obviously we aren’t familiar with all 22,000 species), and it does look a lot like a maggot we are familiar with.

So, is it dangerous? Obviously, this depends on what it is, but the bottom line is that the creatures in and of themselves are not dangerous. We say “in and of themselves” because the creatures, regardless of what they are (more or less), are not themselves capable of inflicting harm. Rather, what is concerning about them is that they may be carriers of harmful bacteria. The habitats of maggots (basically decaying organic matter) can be unsanitary, so if our reader’s children were to handle these creatures, it couldn’t hurt to have them wash their hands. An annelid could also harbor bacteria, but they aren’t in the habit of coming into being in the foulest of environments (like decaying flesh or animal waste, as is the case with maggots).

Unfortunately, we can’t tell our reader exactly what he found, but if we had to guess, which we do, we’d say it’s some sort of maggot. Since it may be some type of maggot, it may not be the most sanitary creature, and for this reason our reader should exercise caution around them; in fact, he should try to eliminate the problem altogether if they are a persistent problem – an infestation is never a good thing.