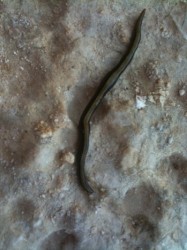 Worms are any numerous limbless, elongated, soft-bodied invertebrate animals including flat worms, round worms and annelids. There are literally thousands of different worm species on the planet today and they play a huge part in helping the earth’s trees, plants, fruits, and vegetables thrive. Worms do several things for the earth. They aerate the soil, which means they dig tunnels in the soil, which allows air to get to the plant roots. Worms also eat organic matter, digest it, and excrete the digested material. This digested material is called “castings.” The castings are rich with phosphorus, calcium, and potassium.

Worm castings are so valuable and ten times richer in nutrients that commercial topsoil, that many gardeners and farmers use the composting method to fertilize plants and crops. Worm castings also help create channels within the layers of the earth’s soil, which helps to hold water better and keep moisture in the soil longer. Continue reading to learn more facts about worms.

·Earthworms belong to one of several different types of ecological groups. There are three broad ecological groups that have been identified for earthworms including: epigeic, endogeic, and anecic. The groups are based on what the earthworms eat and where they tend to live in the soil. The epigeic group is a litter feeder, litter dweller, pigmented, small in size, and it doesn’t burrow. The endogeic group consists of rich soil feeders, topsoil dwellers, has no pigmentation, burrows horizontally, and it is small in size. The anecic consists of litter and soil feeders, soil dwellers, dorsally pigmented bodies, extensive vertical burrows, and a large size. Size and color are usually good distinguishers for adult earthworms.

·Earthworms can be found in just about every corner of the earth. They live in trees, in bark, and under rocks as well as along rivers, near springs, and in ponds. Their favorite place to live, however, is burrowed inside the earth’s rich soil. During the winter months they burrow deep within the earth until the surface warms again during the spring. During the warm summer months, worms stay closer to the tops of soil where they create tunnels to wiggle in and out of. These tunnels are extremely important for plant life as they create a path for water and air, which is essential for the survival of plant life.

·The clitellum of adult earthworms contains features called genital tumescence, and tubercula pubertatis. The clitellum features, the male pores, and female pores are found above the clitellum and are all parts of the earthworm reproductive system.

·The earthworm has “setae” which are tiny hair-like projections that are arranged in rows along the earthworm body. The setae are used for locomotion by the earthworm.

·Places like China, Australia, Greenland, and the Sahara Desert have their own indigenous species of earthworms. Besides the Sahara Desert, you won’t find large numbers of worms living in “sandy” areas, especially sandy beaches. The vast majority of worms on our planet can only survive under certain environmental conditions.

·Worms have no lungs, so they breathe through their skin. This means that the worm’s environment and skin must be moist at all times. This allows the worm to breathe in oxygen. If the worm’s skin dries out, the worm will die from suffocation. While worms need moisture to survive, too much moisture can be fatal. If too much water is present, it takes the place of oxygen, which will cause the worms to flee to the surface. Once on the surface, worms will be exposed to sunlight. If worms remain in the sunlight for too long, they can become paralyzed.

·In addition to needing a moist environment for survival, worms must also remain close to their food supply. Worms feed off of leaves and dead grass, which contain organisms that provide a healthy diet of bacteria, algae, and fungi. Worms feast on dirt as well, especially if they live deeper inside the earth. Worms also eat plants, fruits and vegetables.

·Although you cannot see them, worms do have mouths. The earthworm mouth is called the prostomium. The worm’s mouth is actually big enough and powerful enough to grab a leaf and drag it around. They also have a pharynx, esophagus, crop, gizzard and intestine. When the worm eats its food, it pulls the materials into its mouth with the help of the pharynx and its prostomium (also called acron). This creates a suction motion. This suction motion aids in helping the worm consume large amounts of food in a sort amount of time. The gizzard grinds the food.

·Worms eat so much that they typically produce excrement equal to their own weight every 24 hours.

·The worm’s moist sustenance rich environment plays an extremely important role in reproduction as well. Worms prefer to mate and reproduce in warm moist soil, away from the light.