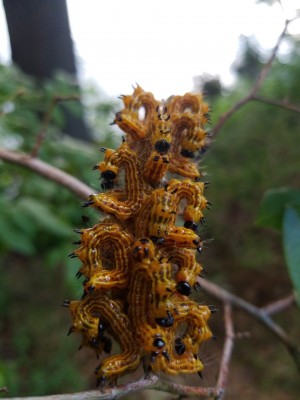 One of our readers sent us an amazing photograph he took in Harriman State Park in New York. The photos shows a bunch of worm-like organisms clumped together on the branch of a tree. He would like us to attempt to identify the specimens. 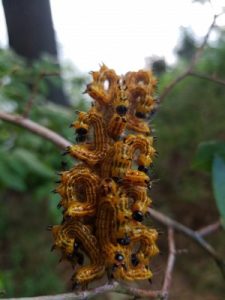 The creatures have yellow and brown striped bodies. Both their heads and legs are black, and they are have sparse white hairs covering their bodies. We are confident these creatures are caterpillars, which is another way to say they are the larvae of moths or butterflies. Identifying caterpillars can be trickier than you might think. This is because sometimes caterpillars of the same species look very different, while caterpillars of two different species might look identical. Luckily, there are a few things that can make identification easier. Distinctive markings and/or appendages can help rule out potential species, and also knowing the plant on which the caterpillars were found on can be crucial because it is often the food source.

Although we don’t know the food source, based on the markings of these specimens, we think these moth larvae are likely yellownecked caterpillars. Yellownecked caterpillars, known in the scientific community as Datana ministra, are found throughout areas of Canada and the United States. Some of their food sources includes the foliage of crabapple trees, oak trees, birch trees, and willow trees. The larvae typically feed in groups, which would explain why the ones our reader found were all clumped up together. Like most caterpillars, yellownecked caterpillars have a reputation for being voracious eaters. They move throughout a tree, defoliating the entire branch before moving on. Finally, when they’ve had their fill, mature larvae drop into the ground to pupate and spend the winter.

In summary, one of our readers discovered a clump of yellow and brown caterpillars on a branch and wanted to know what they were. We believe that these specimens are yellownecked caterpillars!

Article Name
Clumped Up Worms Could Be Yellownecked Caterpillars
Description
One of our readers discovered a clump of yellow and brown caterpillars on a branch and wanted to know what they were. We believe that these specimens are yellownecked caterpillars!
Author
Dori Franklin
Share the knowledge