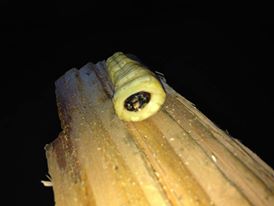 Before moving on, let’s take a look at the two pictures our reader sent: 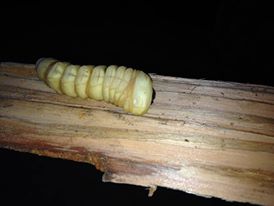 The first image does appear to depict some sort of caterpillar, but the second picture is a bit more tricky to figure out. Clearly, the same creature is featured, but the second image reveals that the creature is not a normal, living caterpillar. Rather, it looks like a tube that is filled with some mysterious substance. This leads us to believe that the reader might have found a caterpillar undergoing metamorphoses into a butterfly.

As we all know from elementary school, caterpillars eventually turn into butterflies or moths. Caterpillars are merely the larval form (i.e., they are in a developmental stage) of members of the order Lepidoptera, to which about 175,000 species belong. This is one of the main reasons identifying caterpillars is so difficult – there are simply so many of them. They are also hard to identify because their appearance changes over the course of their maturation; they can look different after each instar, or a developmental stage that involves moulting an exoskelton so that a new form can be assumed. Walnut caterpillars, to pick an example essentially at random, start as very small yellowish-greenish larvae, then turn a dark red color with white stripes that run down their bodies, and then finally end up as relatively large caterpillars with black bodies covered with white hairs. If the creature our reader found is about to undergo metamorphoses, then it is in the pupal stage of development, so it won’t change any more as a caterpillar (because it essentially isn’t a caterpillar any longer), but it is still very difficult to identify exactly what species our reader found. Thus, we will leave that question behind and instead focus on the possible transformation our reader captured with his photos.

Why do we think our reader found a caterpillar undergoing metamorphosis? Basically, it is the only explanation that makes much sense, as it is doesn’t appear our reader is dealing with a living, moving creature. (The caterpillar doesn’t seem to have legs or prolegs any longer, and without these the caterpillar couldn’t move around.) Instead, it looks like he is dealing with an inert casing, a casing that that will either become a cocoon or a chrysalis that will protect the caterpillar as it turns into a butterfly or moth. Inside this protective covering, the caterpillar actually dissolves and reassembles into its adult form. The caterpillar doesn’t become a mass of undifferentiated matter, but rather retains some basic organization in the form of imaginal discs, or organized collections of cells. During the transformation process, these discs will become the body parts (wings, eyes, etc.) of the adult butterfly or moth. The imaginal discs grow and transform by pulling from the dissolved tissue that surround them. A disc that begins as only a few hundred organized cells could eventually be composed of tens of thousands of cells that form a body part after the transformation is complete. It appears that the creature our reader found is somewhere in the middle of this metamorphosis. The picture above does appear to show dissolved tissue encased in a protective layer.

In truth, though, this is merely speculation – speculation that is informed by the happenings of nature, but speculation just the same. It is certainly possible that our reader found a caterpillar that is on the verge of becoming a butterfly or moth, and there are reasons for thinking this, but we can’t be sure, in part because we are unable to positively identify the exact species our reader is finding. (If we knew he was finding Caterpillar X that turns into Butterfly Y, and we knew what both looked like before and after the transformation, we’d of course be more confident in our suggestion.) However, we think we have given our reader an avenue to explore, and we hope we have pointed him in the right direction.

This many people searched for this info: 3,010