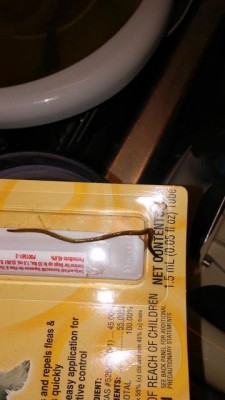 Worm Found After Heavy Rain Could be Flatworm

A reader from Florida just sent us a photo accompanied by the question: “What type of worm is this?” The reader explained that she found the creature crawling up the wall near her front door after heavy rain. The specimen has a white/cream-colored stomach, is flat, appears to be segmented, and seems “snakelike.” She also assured us that the creature isn’t an earthworm. Here is the photo she sent us: 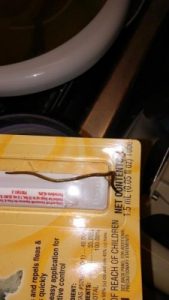 Our first thought was that this is an earthworm. However, our reader seemed quite sure that it wasn’t, and we trust her to identify a creature as an earthworm or identify it as not an earthworm. So, we will explore other options. We think this could be a flatworm. Her description and the photo support this identification. Flatworms are generally brown or black, have a lustrous bodies, and are flat. The creature in the photo certainly could be a flatworm. Also, there are plenty of species of flatworms found in Florida.

Another possibility is that our reader has discovered a small snake. She mentioned that the creature seemed more “snakelike” than an earthworm, but she didn’t go into detail about what she meant by this. The smallest snake in the US is about 4 inches long, which seems shorter than the worm-like organism in the creature. Also, the creature having a lighter underbody is consistent with the appearance of a snake. Our reader might have found a small snake in her home and believed it to be a worm.

In conclusion, we aren’t exactly sure what creature our reader found in her home. We initially thought it could be an earthworm, but our reader said it wasn’t. We think another likely possibility is that the critter is a terrestrial flatworm, also known as a land planarian. A final idea is that our reader has actually not discovered a worm at all, but rather has found a small brown snake! Either way, since she only found one creature and not a bunch of them, we recommend she simply put it back outside and make sure her doors and windows are properly sealed to prevent future visits from worms and worm-like organisms.

Article Name
Worm Found After Heavy Rain Could be Flatworm
Description
we aren't exactly sure what creature our reader found in her home. We initially thought it could be an earthworm, but our reader said it wasn't.
Author
Dori Franklin
Comments: 0 Posted by: Worm Researcher Dori Categories: Flatworm