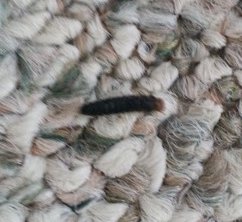 Tiny Black Worms on the Carpet

A reader wrote to us recently about some tiny black worms he has found on the carpet in his house. So far, the reader has found about five of the tiny black worms, and they have been spread across two different rooms of the house, both of which are carpeted. The worms appear to be “solid black,” except for their heads, which are a “reddish, brownish” color. The worms also have “tiny hair-like legs.” The reader has several questions about these black-bodied, red-headed worms with legs: where are they coming from? Are they going to grow and multiply? Are they poisonous or harmful? What is the best way to get rid of them? Before concerning ourselves with these questions, though, we must first try to figure out what the tiny black worms are.

To begin, here is a picture that the reader submitted along with his question:

Unfortunately, it is very difficult to say, and this is true even with the reader’s helpful description and clear photograph. We are confident he found some type of larvae (as opposed to a worm), but there are a staggering number of species of insect larvae – many hundreds of thousands – and a lot of them look quite similar. The differences between larvae are also very minute, and so while it is helpful to know that the larvae above have legs, for instance, many different types of larvae can be identified not on the basis of having legs alone, but rather on the specific features of those legs. Are they segmented thoracic legs, and does the larva have prolegs as well? Many other questions could be asked.

Despite the reader’s belief that he didn’t find a carpet beetle larvae, this is nevertheless what he might have found. Although they are generally a brown or tan color, carpet beetle larvae can be black, and their bodies aren’t always a uniform color, so it is possible to find a black carpet beetle larvae with a red head. We aren’t particularly confident in this answer, but we just wanted to indicate that it is a possibility. You don’t want to rule out the most common pest unless you are absolutely certain you didn’t find it. It also crossed our mind that our reader found black soldier fly larvae, one of the only other kinds of black larvae we know of that a person might find in their home (and even this is rare). However, the bodies of black soldier fly larvae are quite plump, so overall they don’t really look like the creature above.

Without being able to identify the larvae our reader found, it is of course difficult to answer his other questions. However, some of the advice we give in other articles on this site could be helpful. We have written an article about getting rid of carpet beetle larvae, for instance, and we have also discussed whether these larvae are dangerous (not particularly). What applies to these larvae applies to a lot of different larvae. Regardless of what type of larvae our reader found, some good vacuuming and cleaning is in order. The larvae are likely being drawn into the house to pursue a food source, and cleaning often removes this source. We should also note that most of the larvae you might find in your house won’t be harmful or poisonous. They can be pathogen vectors, and thus are worth getting rid of, but a few larvae around the house normally isn’t a serious threat.

We wish we could provide our reader with more precise information, but identifying worms and larvae is an enterprise that doesn’t lend itself to certainty. We wish our reader the best of luck in dealing with his situation, and hope he is able to get rid of the larvae smoothly and swiftly.

Article Name
Tiny Black Worms on the Carpet
Description
A reader wrote to us recently about some tiny black worms he has found on the carpet in his house.
Author
All About Worms
Comments: 9 Posted by: Worm Researcher Evan Categories: Pest Worms