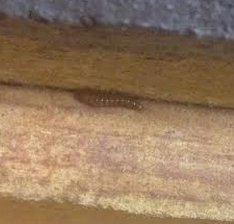 Worms or Larvae in Kitchen Drawers and on Counters

A reader wrote to us recently about some worms she is finding in her kitchen drawers and occasionally on her kitchen counters. For several reasons, we know that the “worms” in the drawers are actually larvae, so we’ll drop the word “worm” from here on out for the sake of accuracy. The larvae were identified as “carpet bugs” by a “carpet guy,” who told the reader she needed to steam clean her house (naturally) and use some sort of pesticide. This is where the reader’s email ends – she actually doesn’t ask any question – but we are assuming she at least wants to know what the larvae in kitchen drawers are, and once we arrive at an identification, we can briefly touch on the matter of getting rid of them.

The reader submitted a few different pictures along with her email. The first shows a larva in what appears to be a sink: 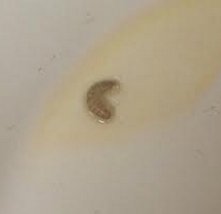 And the second shows a larva in a drawer:

These pictures don’t appear to depict the same kind of larva, but this could simply be because they are at different stages in their developmental cycle. The reader mentions that the larvae “tend to peal,” after which “another worm […] comes out,” and we are pretty sure she is just referring to the process of molting, a common phenomenon among larvae as they progress from one instar (developmental stage) to another. As the larvae grow bigger, they shed off one layer of skin and take on another.

Given where the reader found the larvae, we strongly suspect she is dealing with a common kitchen pest like a mealworm or waxworm. Mealworms are the larval form of Tenebrio molitor, a species of darkling beetle, and waxworms are the larval form of Indianmeal moths, which are often just called “pantry moths.” Overall, the larvae above look more like mealworms, so we think this is what our reader found. Interestingly, however, the first image looks like a waxworm as well, which are paler and plumper than mealworms, so we suppose it is conceivable she is finding both larvae in her house. As for the “carpet bug” hypothesis offered by the person who inspected our reader’s house, we aren’t entirely sure what to say, in part because it isn’t even clear what a carpet bug is. We are assuming he meant a carpet beetle larvae, which are extremely common household creatures we write about all the time, and this is in fact a possibility. However, the larvae look more like mealworms to us, and this suggestion is strengthened by where the larvae were found.

If our reader has in fact found carpet beetle larvae, though, then the carpet guy’s suggestion makes some degree of sense. Carpets do need to be cleaned thoroughly because this is where the larvae derive much of their food source, although this wouldn’t necessarily need to be done with a steam cleaning. Indeed, it might be more essential to vacuum because the goal is to remove detritus (like human and pet hair) and the larvae themselves, and this might be more easily accomplished with a vacuum. However, given that the reader found the larvae in her kitchen, we don’t know why the first suggestion would be to steam clean the entire house. (Well, if the carpet guy is a carpet cleaner, then we can see why this suggestion was made.) Our reader needs to focus on cleaning the drawers and counter tops where the larvae are found. We have detailed this in greater depth in an article about getting rid of mealworms, but basically our reader needs to focus on removing any food source that the larvae might have infiltrated. Unfortunately, this food needs to be thrown away, and any remaining food and replacement food needs to be thoroughly sealed. An investment in some good plastic containers might be in order. Since our reader is cleaning her kitchen, she definitely shouldn’t use any sort of pesticide or other heavy chemical. Some disinfectant is fine, but she must remember that she is storing food in the area she is cleaning.

We aren’t certain our reader found mealworms, but it seems like the most likely possibility because of the appearance of the larvae and their location in our reader’s house. However, the suggestion of the carpet guy shouldn’t be totally discounted. He actually saw the problem firsthand, and the larvae pictured above do look a bit like carpet beetle larvae as well. In any case, some cleaning is in order for our reader, and we wish her the best of luck in addressing her larvae problem.

Article Name
Worms or Larvae in Kitchen Drawers and on Counters
Description
A reader wrote to us recently about some worms she is finding in her kitchen draws and occasionally on her kitchen counters.
Author
All About Worms
Comments: 0 Posted by: Worm Researcher Evan Categories: Meal Worms, Pest Worms