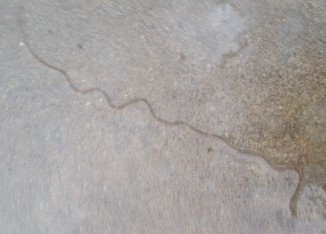 Recently, we received the photograph below from a reader who was wondering what sort of creature it might be. 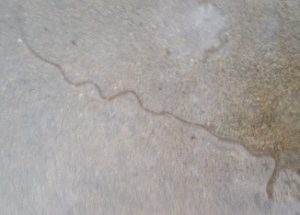 To us, this looks like a very long, very flexible worm. Almost like a piece of angel hair pasta. This leads us to believe that our reader has found a horsehair worm. While this is not one of the most common species we write about, it is an animal we have written about before.

Horsehair worms (phylum Nematomorpha) are best known as parasites that infect arthropods such as beetles and crickets. However, it is actually the larvae that infect hosts, the adult worms are free-living.

Perhaps the most interesting thing about the horsehair worm is how the adult gets out of its host. Once the horsehair worm reaches maturity, it attempts to manipulate its host (through ways that are not clearly understood) into going to a location where there is water. The host will then drown itself, and the horsehair worm will burst out of the host’s body and then go along to live its own little horsehair life, which consists largely of laying eggs which will hatch into larvae which will then infect other arthropods which will then be compelled to drown themselves so that the grownup horsehair worms can lay more eggs to hatch into more larvae and so on…. This may not sound like much of a life but, ultimately, all species are driven to reproduce. Remember that next time you see a couple out on a date.

Of course, sometimes the host does not actually make it to the water before the adult horsehair worm must make its exit. This is the case in the photograph below. 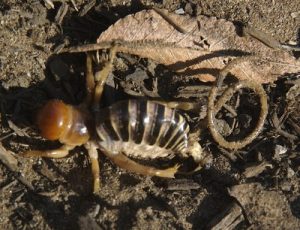 Jerusalem cricket being exited by horsehair worm. Photo by jkirkhart35 (CC BY 3.0, via Wikimedia Commons)

This is a rather sad case because, unless the horsehair worm manages to find water or (for some species) very wet soil, it will die. This will mean that the poor cricket will have given its life in vain.

It is interesting to note that, though we think of horsehair worms as exclusively infecting arthropods, there have been cases of this type of parasite being found in humans. A study from Japan describes the infection of two human hosts, an elderly worm and a baby boy. Thankfully, the worms were found in the vomit and feces of these patients, so the exit was not quite as dramatic as that shown above.

The good news is that human infection of this type of parasite is extremely rare. So, there’s no need for the vast majority of us to worry about it. We can worry about the Loa loa eye worm and the guinea worm, instead.

Article Name
Reader Discovers Horsehair Worm on Sidewalk
Description
Recently, we received the photograph below from a reader who was wondering what sort of creature it might be.
Author
Alexis Rodriguez-Carlson
Comments: 0 Posted by: Previous Author Categories: Interesting Worms, Parasite Worms