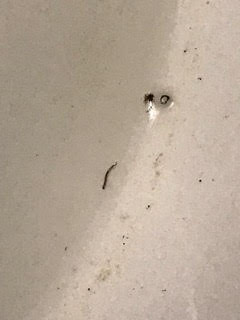 One of our readers discovered some worm-like organisms in his toilet. He explained that his wife is freaking out about the small black worms, and is worried that someone in his family may have worms (as in the worms might be coming from a human). He also said that the toilet has quite a bit of sediment in it even after flushing it. 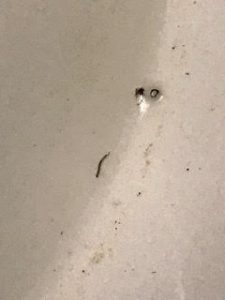 He explained that he took the photo with his phone all the way zoomed in, so it’s the most detailed version possible. He thinks the worms are about a quarter of an inch long. We can see that they are black and thin, but aren’t able to make out any other features.Regardless, we are confident that these worms are probably not coming from a human being. We believe that our reader is dealing with drain fly larvae.

Drain fly larvae are extremley common household pests. As most larvae do, drain fly larvae feed on organic material. These larvae breed, live, and feed on the organic matter that builds up in drains. Gross! Luckily, getting rid of these larvae is relatively simple, and just requires a bit of tidying up. Our reader will need to clear out every bit of grime in his toilet pipe to ensure these larvae have no place to live and nothing to eat. He should use a pipe brush to clean off the sides of the pipe, then use a drain cleaner designed to kill organic material. Since he mentioned a bit of sediment in the toilet, we are suspicious that there might be a clog in his toilet as well. If this is the case, he will need to use a plunger to clear out whatever is blocking the pipe. The best way to prevent these larvae from returning is to clean the toilet at least once a month!

To conclude, a reader sent us a picture of a few black worms he found in his toilet. We are confident that these specimens are drain fly larvae, not parasitic worms like his wife was concerned about. That being said, since we aren’t medical professionals, we aren’t licensed to give medical advice. If there is any fear for health or safety among his family members, we encourage him to consult with a doctor.

Article Name
Drain Flies Discovered in Blocked Toilet
Description
A reader sent us a picture of a few black worms he found in his toilet. We are confident that these specimens are drain fly larvae, not parasitic worms like his wife was concerned about.
Author
Dori Franklin
Comments: 0 Posted by: Worm Researcher Dori Categories: Drain Fly Larvae