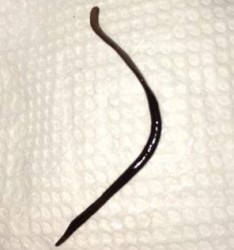 A reader in south Louisiana wrote us a question a few days ago about a black worm with a brown underside that he found in his backyard. The worm is about three or four inches (seven to ten centimeters) long, and its body is flat. The reader was wondering what type of worm he found, and if it is parasitic. The latter concern is connected to his dog, who has had issues before with worm infections. We’ll do our best to address both issues, which are of course related.

First, here is one of the pictures the reader submitted:

We can’t really discern the creature’s body shape from the picture, but assuming it is flat, then it seems that our reader found a species that belongs to the phylum Platyhelminthes, which appropriately are known as “flatworms.” The reader was wondering exactly what worm species he found, but that level of detail could be hard to determine without extensive and specialized research. However, since the reader found the worm in his backyard, it is evidently a comparatively rare terrestrial flatworm. There are around 15,000 described flatworm species, and less than a thousand are terrestrial species. These terrestrial species are land planarians and they make up the Geoplanidae family. Over half of the flatworm species are parasitic, but not planarians, so if our reader did in fact find a flat worm, it isn’t parasitic.

As a helpful point of comparison, it is worth mentioning that hammerhead worms, which readers periodically write to us about, belong to the Geoplanidae family. In at least one instance, we answered a question about dogs and hammerhead worms, concluding that if the reader found a hammerhead worm, it shouldn’t have any effect on, or connection to, the dog because they aren’t parasitic and actually only eat earthworms, so they aren’t harmful to humans or pets. This same advice applies to our reader: if he found a land planarian, we don’t see how it would have any direct connection to our reader’s dog. More generally, the types of worms that afflict dogs don’t really look like the creature above, and it would also be unusual to find one that doesn’t have a direct connection to the dog (e.g., it would be found in the dogs feces or vomit). Also, the parasitical worms that afflict dogs are ingested as eggs or tiny larvae – dogs get tapeworms, for example, when they swallow an inflected flea – not as full-grown adult worms. Thus, the types of adult worms you might see in your yard, like a terrestrial flatworm, shouldn’t have any connection to your dog, and if a worm is related to the dog, the connection is often quite clear (because, again, they will be observed in something like your dog’s feces).

So, we don’t think our reader should be concerned about the worm he found, provided we have correctly identified it. However, our identification could be incorrect, and in general we must stress that our reader should visit the vet if he is concerned about his dog’s health. We were shown a worm and asked to identify it, so what we say in only applicable to that end, and shouldn’t be taken as veterinary advice.

Article Name
Black Flatworm with Brown Underside in Backyard
Description
A reader in south Louisiana wrote us a question a few days ago about a black worm with a brown underside that he found in his backyard.
Author
All About Worms
Comments: 2 Posted by: Worm Researcher Evan Categories: Worms Generally