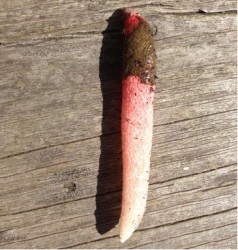 Fortunately, the reader submitted a picture along with his question, which will show the color scheme we were trying to convey above.

This is hard to see in the picture, but the worm is fairly large, about seven centimeters (2.75 inches) long.

Despite extensive searches in both English and German, we can’t seem to turn up any information about this creature. It is not really like anything we have ever seen or been asked about before, and we can’t find any promising leads that suggest even a broad taxonomic categorization. When people find “worms” in their garden, they are very often finding a type of insect larva, like a grub or caterpillar. However, the creature above would be quite big for a larva, and we also don’t see any other body features that suggest it is a larvae (e.g., three pairs of legs). So, in this case, we think out reader might have actually found a worm, as we define the word “worm.” Unfortunately, though, we don’t want to say anything else because we fear we will just provide incorrect information.

The great thing about this site, though, is that we have a global audience of readers, and on multiple occasions a comment has helped us identify a creature. Thus, if anyone is reading this article and has some idea what our reader in Northern Germany found, please tell us your suggestion in a comment below. Perhaps we’ll identify the worm after all.

Article Name
Red, Pink Worm in Garden in Germany
Description
A red worm was found by a reader in Northern Germany, or perhaps we should say ein roter Wurm wurde von einem Leser in Norddeutschland gefunden.
Author
All About Worms
Share the knowledge

2 thoughts on “Red, Pink Worm in Garden in Germany”

This many people searched for this info: 1,798