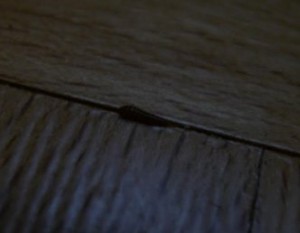 Small Brown Worms Under Bed Sheets and on the Floor

A reader wrote to us a little while ago about a small brown worm that she found in her house. She said she “could find this worm under my bed sheets and floor,” and we aren’t sure is we should take this as an expression of the mere possibility that the worm could be found on the bed sheets and floor, as her use of the subjunctive mood seems to suggest, or if the reader did in fact find the worm under her bed sheets and then on the floor. In any case, she sent a picture of the “worm” in question, which actually looks like a larva, not a worm. More specifically, she appears to have found a carpet beetle larva, which the gods have fated us to write about without end. Below we explain why we think our reader found a carpet beetle larva.

First, here is the picture the reader sent along with her email:

The lighting in the picture isn’t very good, so it is difficult to examine what our reader found in any real depth. You can make out a small dark-colored creature with a cone-shaped body, and that is about all. Despite the limitations of the photograph, we still think our reader found a carpet beetle larva, but we can’t be certain of this given the circumstances.

Understandably, the reader expressed her interest in getting rid of the worm she found, and this is a topic we have written about several times before. We have an article explicitly titled “How to Get Rid of Carpet Beetles and Carpet Beetle Larvae,” and we have also written about getting rid of the creatures in various specific circumstances, like when they are found under furniture. These are good resources to consult, and for now we’ll content ourselves by writing only that getting rid of carpet beetle larva is a cleaning task, with a vacuum playing the starring role. Basically, you want to remove the types of things that carpet beetle larvae feed on, like hair. It is also worth noting that the reader might not have any sort of issue on her hands since she only found a single larva; however, the larvae often stay out of sight, so a thorough cleaning is probably a good idea.

Again, we can’t be certain that our reader found a caret beetle larva, but this is a promising suggestion given the information that we have.

Article Name
Small Brown Worms Under Bed Sheets and on the Floor
Description
A reader wrote to us a little while ago about a small brown worm that she found in her house.
Author
All About Worms
Comments: 0 Posted by: Worm Researcher Evan Categories: Pest Worms