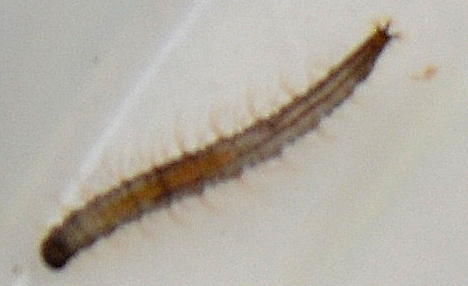 A while back, we received a short email from a reader about worms in beds that are small, striped, and black. (The worms are small, striped, and black, not the beds.) We say the email was merely “about” the tiny worms because it didn’t ask any sort of question – it simply offered a description (“very small” worms that are “black and stripes,” to use the reader’s unique phrasing) and nothing else. The reader also didn’t specify if she is finding the worms in her bed; indeed, she didn’t even indicate if she is finding them at all. She might just be curious about small, black worms with stripes in general. We presume the reader is hoping for us to identify the worm, so below we explore a few different possibilities.

First, there are some limitations to the reader’s description that make definite answers elusive. Apart from the description’s brevity, it isn’t entirely clear what the worm looks like. As noted, the reader described it as “black and stripes,” and even if we make the likely assumption that “stripes” is a typo of “striped,” we’re not sure what to make of this description. Is the worm mostly black, but has some stripes? In which case, what color are the stripes? Or perhaps the stripes are black, but then what is the main color of the worm? We are leaning toward the latter interpretation, but we can’t be sure of this. Like so many before her, the reader also didn’t supply anything like a precise measurement of the creature. Yes, it’s “really small,” but lots of worms are quite small, as are many larvae.

And speaking of larvae, we are reasonably confident this is what our reader found. Many larvae look like worms, but these larvae are actually the immature forms of various insects (insects that look very different when they are adults, as when caterpillars grow into butterflies or moths). In any case, what kind of larvae did she find? We find ourselves pulled in different directions. Based on the creature’s physical appearance, or what we surmise its physical appearance to be given the information we have, our first hypothesis would be moth fly larvae, one of the most common answers we give in response to reader questions. They have dark stripes (some are black) that are often prominent, and they are also quite small, being only a few millimeters in length much of the time. However, moth fly larvae are almost always found in aquatic environments with decaying organic matter. Toilets are good habitats, as are drains. (Moth flies are often called “drain flies.”) So, it would be unusual to find them in a bed unless they were accidentally placed there, like if they somehow managed to attach to a person or animal that ended up in a bed. In other words, a bed is not a place where moth flies would lay their eggs, and it is of course the eggs that grow into larvae.

Given that a bed is (hopefully) not an aquatic environment, we think it is somewhat unlikely that our reader found moth fly larvae, despite the fact that the description she gave us matches this creature’s appearance fairly well. The other two possibilities that come to mind are flea larvae and carpet beetle larvae, both of which could be found in a bed. Indeed, the former very often are, thanks to pets climbing onto beds. They are also only a few millimeters long, like moth fly larvae. The big limitation with this supposition is that flea larvae are not striped or black. They can sometimes look partially black thanks to a dark interior that can be seen through the larvae’s almost transparent body, but it would be unusual – nay, inaccurate – to call them black and striped. This leaves us with one final possibility: carpet beetle larvae. While probably not as likely to find in bed as flea larvae, they nevertheless could end up here. They are of course found in carpets (hence their name), but they are found in other fabrics as well. They can also be striped, although this is not always very noticeable. However, they tend to be a brownish, yellowish color, and moreover they often don’t look like worms. They are covered with small hairs (setae), and they have long hairs on their posterior end. They can be as small as the other two creatures discussed above, but they can also be a bit bigger (not that this means that they couldn’t reasonably be described as “very small”).

To conclude, it isn’t clear what our reader found. We weren’t given very much information – in fact, we weren’t even asked a question – and every possibility we come up with has problems. Carpet beetle larva is perhaps the most likely hypothesis, but we aren’t terribly confident about this. If one of our suggestions is not correct, we nevertheless recommend that our reader look into similar larvae – this is the most promising route to go down.