Skinny Worms on the Patio

A reader has recently been finding a lot of skinny worms on her patio. Normally they are dead, perhaps because of a lack of moisture (so speculates the reader), and the worms are primarily red, but their underside is beige. (In the pictures the reader sent, the worms look fairly brown too, but they are definitely of a reddish hue.) The reader doesn’t seem to mind their company, but she has a cat that spends a lot of time on the patio, so she wanted to make sure the worm isn’t parasitic. What is the skinny worm on the patio, and is it harmful to our reader’s cat?

Here are a couple of nice pictures of the creature under examination: 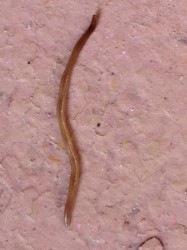 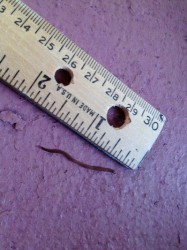 When we first looked at these pictures, it appeared as if the creature had tons of small legs. If this is in fact the case, then we would be basically certain our reader is finding millipedes. (It would be a millipede and not a centipede because the creature’s legs are more or less underneath its body. Centipede legs are more sprawling and can be readily detected with a mere passing glance.) However, we zoomed in on the pictures and we’re fairly sure that the creature doesn’t actually have legs. In the first picture, it kind of looks like there are exposed legs on the side of the creature by the ruler, but in fact this is probably just shading. Again, though, if these happen to be legs, our reader can trust that she is finding millipedes, and these shouldn’t present any danger to her cat because they don’t even bite.

Our other thought is that the reader might have found an immature earthworm. As you can see, the creature above is only a little longer than an inch, which would be small for a full-grown earthworm, but not for one that is still growing. Moreover, if this were an adult earthworm, it would have a clearly discernible clitellum, the bump in the middle of earthworms. The clitellum is part of the reproductive system of earthworms, and since immature earthworms are by definition not sexually mature, they do not have a clitellum that can be seen. (It can be seen when worms are sexually mature because it swells up.) Why do we think it is an earthworm at all, immature or otherwise? Simple because it looks a lot like one (same color, body shape, etc.), and earthworms are one of the most common creatures people come across, on a patio or anywhere else. Plus, earthworms will certainly dry out on a place like a patio (they need moist soil to survive), which is consistent with the observations of our reader. If the reader is finding earthworms, they are definitely not harmful to her cat.

It’s almost embarrassingly simple to suggest our reader found a simple earthworm, but frankly that is the best guess we have. They are extremely common, and we must always assume readers find common creatures before we assume they have found obscure ones. If the creature does in fact have tons of legs, then our reader almost certainly found a millipede, but upon very close examination, this does not appear to be the case. Either way, though, we don’t think the worms our reader is finding on her patio pose a threat to her cat.