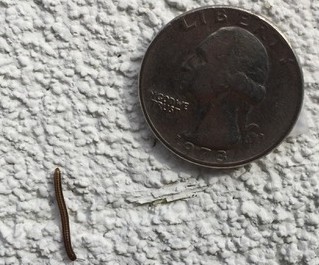 We have received a question from a reader who would like help identifying the worms, or worm-like beings, that are crawling on the outside of his house after rainstorms. He has included a photograph of one of the creatures next to a quarter for a sense of scale. If we do to identify the critter, our reader would like some advice as to how to get it and its cohorts to go away. 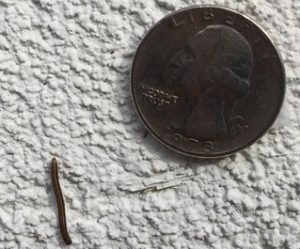 First, we’d like to thank the reader for his clear photograph. We’re able to enlarge the photo quite a bit while still keeping the picture relatively clear. 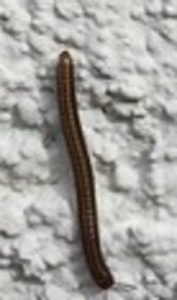 Closer inspection reveals that this creature: 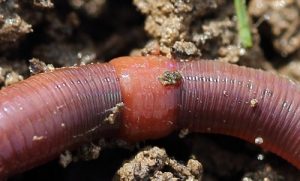 Close up of a clitellum. Photo by Holger Casselmann (Own work) (CC BY-SA 3.0, via Wikimedia Commons)

Because it doesn’t have a clitellum, we can rule out many common earthworms. To us, this doesn’t look like a worm at all, it looks like a millipede. It could be one of several thousand species in the class Diplopoda. While millipedes tend to live in dark places, it is not uncommon for them to come out and climb wall when their regular homes flood (such as during a rainstorm). 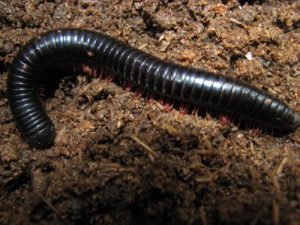 The good news is that these little critters are not harmful to humans or pets. If eaten, they may taste quite unpleasant, but we’re guessing that our reader isn’t planning to have these as a meal. As for the millipedes’ diet, they like to eat decaying plant material, so they’re not a threat to crops. In fact, they’re helpful as they break down decaying plant material, though they’re not as efficient as composting worms.

Although millipedes do not pose any threat, they do tend to creep people out. We understand why this reader would prefer not to have quite so many of them keeping him company. Frequent readers may guess that we are going to recommend that the reader remove the millipedes’ food source. Millipedes are attracted to decaying plant material, and so are commonly found in or near mulch beds or compost bins, which are great sources of food for the local millipede population. The same goes for large leaf piles or heaps of cut grass. Any source of decaying plant material looks like an all-you-can-eat buffet to a millipede. Take away the food, and the millipedes will move on to greener (decaying) pastures.

Another option might be for our reader to provide better drainage for mulch beds or compost bins. Millipedes don’t really want to hang out with us any more than we want to hang out with them, so keeping their homes from becoming waterlogged will help keep them out of sight and out of mind.

Article Name
Tiny Black
Description
We have received a question from a reader who would like help identifying the worms, or worm-like beings, that are crawling on the outside of his house after rain. He has included a photograph of the creature next to a quarter for a sense of scale. If we do to identify the critter, our reader would like some advice as to how to get them to go away.
Author
Alexis Rodriguez-Carlson
Comments: 0 Posted by: Previous Author Categories: Interesting Bugs