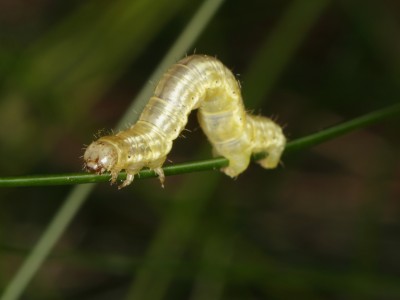 Caterpillars on Acacia Tree are Likely Not a Threat

January 19, 2017
Recently, a reader wrote to us from Bronberg Ridge in Pretoria. She states that she saw some worms on the leaves of her haak-en-steek Acacia tree. These worms were hanging, suspended on a thread, from the branches of the tree. The worms had no hairs, were pale green, and were about 20 mm (a little more than ¾”) in length. She wonders if we know what these creatures are and if she should be concerned about them hurting her tree. We love questions like this, because they allow us to learn things that are a bit outside our comfort zone. First, let’s look into the location. Knowing where a reader lives helps us to figure out what creatures are common to that area. In this case, we’re not sure where Bronberg Ridge in Pretoria is located. A quick google reveals that it is in the Gauteng END_OF_DOCUMENT_TOKEN_TO_BE_REPLACED
Comments: 0 Posted by: Previous Author Categories: Caterpillars

October 8, 2013
A couple of years ago, we received a question about "long, thick, black, and spiky caterpillars with white dashes and an orange stripe." This is more or less how the reader described the creature he found, which he called a "worm." We were confident that our reader found a caterpillar and not a worm, but without a picture, we struggled to identify the specific species of caterpillar. Then, about a year after we wrote this article, another reader sent us a picture of a spiky caterpillar with an orange stripe that matched the above description. Both readers are from South Africa, so we were fairly sure that they were dealing with the same caterpillar, yet we still weren't able to say exactly what species of caterpillar our reader found. At long last, however, we think we have arrived at an answer: the orange and black caterpillar with spikes is an African Emperor Caterpillar (Bunaea alcinoe), which is also called a Cabbage Tree Emperor Caterpillar. END_OF_DOCUMENT_TOKEN_TO_BE_REPLACED
Comments: 8 Posted by: Worm Researcher Evan Categories: Caterpillars
Get tested for parasites at a fully-qualified lab near you, no doctor's visit required, through All About Worm's partnerships with HealthLabs and Life Extension Labs!