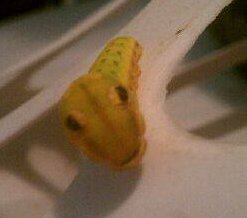 Via the All About Worms Facebook page, we recently received a question about a “kind of worm” that appears to have two eyes. Overall, the worm is yellow, but on one end of its body it has black spots that look exactly like eyes. The eyes on the yellow worm are quite large, to the point that they look somewhat cartoonish. The reader sent a superb picture of the creature and only asked what kind of worm it is. So, we are tasked with a question of identification: what kind of worms are yellow and have large eyes?

First, here is the picture our reader sent in:

The worm almost appears to be posing for the camera, gazing directly into the camera with its big, black eyes. The only problem with this scenario is that the worm actually doesn’t have eyes, and in fact it isn’t a worm. Rather, it appears to be a caterpillar with eyespots. Eyespots are present on many types of animals and are an example of mimicry. (The eyespot appears to be the eye of another animal – that is, the eyespot “mimics” a regular eye.) On caterpillars, eyespots can divert predators like birds from attacking because the caterpillar looks like an inedible or potentially dangerous creature. So, we can tell our reader she found a caterpillar with eyespots, and not a worm, but this isn’t terribly specific.

And unfortunately it is hard to be much more specific because of the enormous diversity of caterpillars. Caterpillars are the larval form of moths and butterflies, who are the members of the Lepidoptera order, which is comprised of around 175,000 species. To be sure, not all of these caterpillars have eyespots, but this is a common defense mechanism, so eyespots aren’t exactly a sure way to positively ID any given caterpillar species. (There is actually a really well-run, professional blog about caterpillars and eyespots, and looking around this site will give you an idea of the diversity of the phenomenon.)

Unfortunately, we aren’t sure what the yellow worm with eyes is, but we are confident it isn’t in fact a worm with eyes. It is almost certainly a caterpillar with eyespots, and hopefully this will at least partially help our reader. If anyone has identification suggestions, please feel free to leave a comment below.

Article Name
Yellow Worm with Eyes
Description
We are tasked with a question of identification: what kind of worms are yellow and have large eyes?
Author
All About Worms
Share the knowledge

1 thought on “Yellow Worm with Eyes”

This many people searched for this info: 5,172