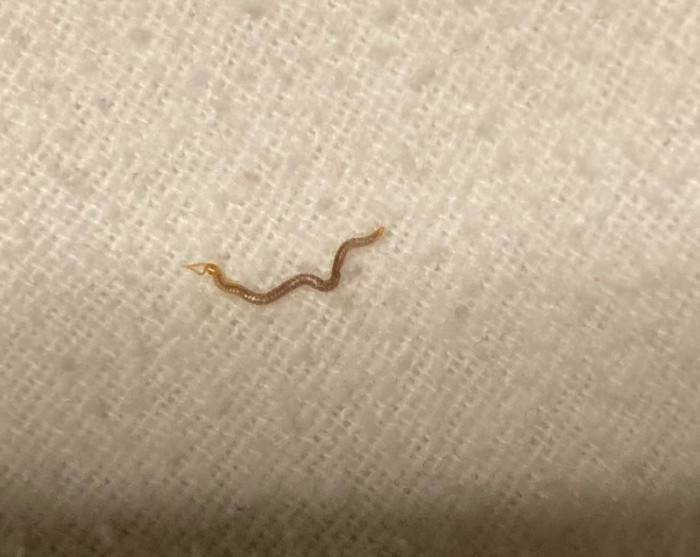 “It was wriggling like a worm and didn’t have legs”, states this reader in “Rural England” concerning the creature pictured below. He adds that it was less than an inch in length and that it was found in his house. 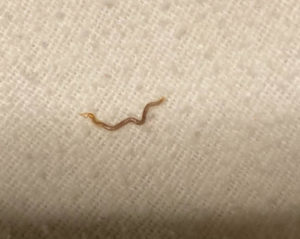 Now, though we do not mean to undermine our reader’s description of the creature, from what we can see this creature does indeed have legs. To be fair, they are really difficult to see: we can only see them once we zoom in on the picture.

We would not be so adamant about this creature having legs if we did not think we knew what it was already. In addition to its multitude of legs, it also possesses a pair of long antennae, and when we take this into account, as well as its size, we come to the conclusion that this is a house centipede.

Centipedes are not actually worms, but arthropods. This means they belong to a phylum of organisms that have legs joined at segments, and that their bodies are protected by exoskeletons. One other such arthropod is the millipede, which the centipede is often confused with.

The key differences between them are physical and behavioral.

Thirdly, centipedes can be far more dangerous than millipedes. The emphasis here is on ‘can’: it really depends on the species.

A house centipede, like the one our reader found, is not dangerous to humans or pets, and most species of centipedes found in the Northern hemisphere will not be dangerous. The most they can do is sting you with their forcipules (two appendages near their faces that they use to inject their prey with venom) which will leave a sting and maybe an itch.

That said, there are species of centipedes in the Southern hemisphere that are more dangerous, mostly due to the fact that much larger species exist in the tropics of South America, for example. One such species is the Amazonian giant centipede, which has been known to hunt lizards and rodents.

In any case, house centipedes are not harmful to any significant extent to humans, and some consider them beneficial to keep around. This is because, like spiders, they hunt the other small critters that commonly invade a home, such as mosquitoes, moths and mites. However, unlike spiders, they do not leave any webbing behind that needs to be cleaned up!

To conclude, the creature our reader found is a house centipede. They are not dangerous to humans or pets, so he needs not worry on that front. He can just move this centipede outside (perhaps using a dustpan to avoid getting stung) and call it a day. We hope this article helps and we wish him the best!

Article Name
Yellow Worm-like Creature with Antennae and Many Legs is a House Centipede
Description
"It was wriggling like a worm and didn’t have legs", states this reader in "Rural England" concerning the creature pictured below. He adds that it was less than an inch in length and that it was found in his house.
Author
Worm Researcher Anton
Share the knowledge

People helped by this info: 605