A little while ago, we received a question from a reader asking about a worm he found near his garden. It is primarily yellow, but it has small black stripes on it too. The reader found this yellow creature with black stripes, which is shaped like small tube, on a tree. He sent a nice picture of the worm (which is in fact probably a caterpillar), which is below. He was wondering what kind of worm he found, and also if it was “aregetic” to humans. “Aregetic” is not a word, as far as we and Google can tell, so we suspect the reader might have meant something like “harmful” or “dangerous,” as this is the most common concern that readers have with worms (or caterpillars) they find. What is this worm or caterpillar, and is it dangerous?

Despite our best effort to find information, we simply do not know what kind of creature our reader found. However, since we were sent a picture of it, we will include that in this post, and invite our readers to email us if they have ideas for what this worm, caterpillar, or other creature may be. If we receive a good suggestion, we’ll update this article to reflect our reader’s suggestion. For what it’s worth, the reader said the creature was found on a tree that is called a “perumaram,” which is evidently a Tamil word. Tamil is a language spoken in some parts of India, as well is in Sri Lanka and Singapore, so perhaps the creature was found in this area of the world.

In any case, here is the creature in question: 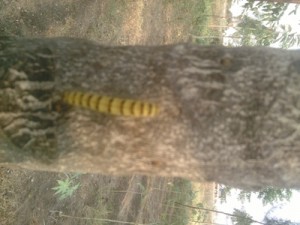 Just because we do not know exactly what this creature is does not mean that we cannot say a few helpful things about it. First, we can say that this creature would appear not to be a worm, but rather a caterpillar, which is the larval form of a moth or butterfly. Although “worm” is actually a fairly vague term scientifically speaking (it refers to an obsolete taxon), meaning it is hard to say exactly what a worm even is, generally the word refers to creatures that burrow in the ground. The archetypal worm is the earthworm, of which there are several different species. So, the type of creature our reader found would generally not be referred to as a “worm.” Again, it looks more like a caterpillar, which tend to be much more multicolored than your average worm. (For the record, because we think it’s caterpillar, we searched Discover Life’s very helpful caterpillar identification guide, but we could find no species of caterpillar that look like the creature pictured above. However, we always like to point this resource out to our readers.)

If the reader did in fact find a caterpillar, one thing we can say about it is that it is likely not harmful to humans. In general, humans can safely interact with caterpillars, which always comes as welcome news to parents of children the world over. If caterpillars do cause problems, it generally involves skin irritation. Many caterpillars look poisonous to their predators – this is one of their defense mechanisms – but this doesn’t mean they are in fact poisonous. Regardless, we don’t recommend eating caterpillars.

Unfortunately, we can’t say much else about the creature our reader found, but if anybody out there would like to submit their suggestion as to what it might be, please do so!

This many people searched for this info: 4,373