When you’re in the business of describing worms and related creatures, as we are, you grow to tolerate things that the common folk might regard as creepy and disgusting. But we are humans just the same, so when we received a picture recently from a reader of what appears to be a worm with teeth, we could react with nothing but disgust and indeed a bit of terror. We don’t mean to belabor the point, but the worm (or rather worm-like creature – we’re not sure exactly what it is) is fundamentally gross. As we said, the reader did include a picture, for good or ill, of the “worm with teeth,” and naturally he wanted to know what it is. What is the creature that struck fear into our hearts?

First, it is only proper that we include a picture of the creature up front so you can share in our discomfort. Do not scroll down if you’re eating something, or if you are in general squeamish about worms and similar creatures. Here it is: 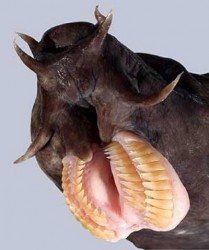 See what we mean? It’s not a pleasant sight, and this thing could easily play a starring role in any number of horror films. Anyway, what might it be?

We have never seen anything quite like this before, which of course makes us less certain about what this thing might be. However, two possibilities come to mind, neither of which are worms. The first is that this creature is some sort of leech. There are around 700 types of leeches, and their taxonomy is complicated and currently in need of a better organizational scheme (as is the case with many organisms – taxonomy is fluid). However, there are types of leeches that are currently classified as “Arhynchobdellida,” which is an order (at least for now). Many of the species of leeches in this order are “jawed,” which mean they have teeth, often many hundreds of teeth that are quite sharp (not unlike the creature above). However, leeches in this order tend to have a tripartite jaw, whereas the creature above has four rows of teeth. Many other leeches have a round mouth, which doesn’t quite match the mouth of thing in the picture. Still, the creature our reader is curious about could very well be a leech of some sort.

The only other possibility we were able to find is linked to an unfortunate medical problem faced by an Australian couple that was reported by a number of news outlets. The couple’s bodies were being eaten by “tiny worms with teeth,” and according to some reports they suffered this lamentable fate because they were infected with “gnathostomiasis larvae.” From what we’ve gathered, this means that the couple was being attacked by either the Gnathostoma spinigerum or Gnathostoma hispidum (or technically the larval form of either), which are both nematodes (round worms). Both of these creatures attack vertebrates, which become infected after eating contaminated food (like fish) or drinking contaminated water.

Since both of these are, in the loose sense of the phrase, “worms with teeth,” and the picture above appears to depict some sort of “worm” with teeth, perhaps it is a type of leech, or it might also be a Gnathostoma spinigerum or Gnathostoma hispidum. In any case, we do know it’ s creature we hope to avoid.

If any of you readers has an alternate suggestion for what this might be, by all means please drop us a comment!

1 thought on “A Worm with Teeth”